Fulani herdsmen from Ilorin, the Kwara State capital, but resident in Ekiti State under the aegis of Jamu Nate Fulbe Association of Nigeria have criticised the new grazing law signed by Governor Ayodele Fayose. 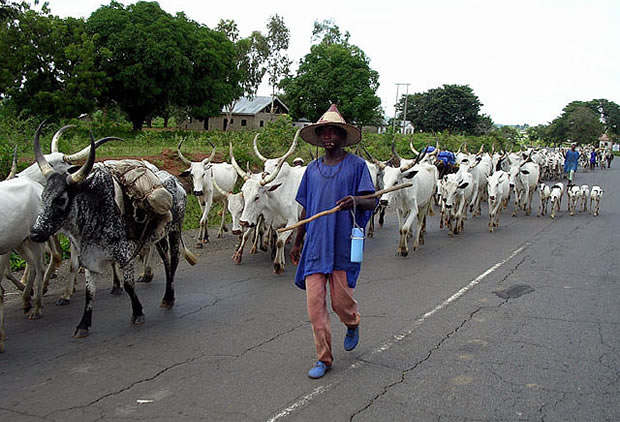 The law titled, “ Prohibition of Cattle and Other Ruminants Grazing in Ekiti, 2016,” provides that grazing activities must be from 7am to 6pm on a daily basis.

According to the Speaker, Ekiti State House of Assembly, Kola Oluwawole, any herdsman caught with firearms and any weapons whatsoever during grazing shall be charged with terrorism.

The law also provides that any farm products destroyed by the activities of any caught herdsman shall be estimated by an agricultural officer and the expenses of the estimate shall be borne by the culprit.

Under the law, anyone found violating the bill, upon conviction, shall be sentenced to six months in prison without an option of fine.

But the legal adviser to the herdsmen, Mr. Umar Imam, on Wednesday argued that herdsmen who carried light weapons such as cutlasses, knives, catapult and arrows within the time stipulated by the new law should not be charged with terrorism.

He added that this contradicted the Terrorism (Prevention) Act, 2011.

Imam said, “The law of the federation on terrorism is very clear and no one can be charged for terrorism for carrying lesser arms like cutlasses, catapults and knives during the grazing period as contained in the Ekiti new law.

“I have made it in my submission during the public hearing on the bill in the Ekiti  State House of Assembly that these Fulani herdsmen used to use these lesser weapons for certain purposes that can make grazing easier.

“I also told them that movement at night while relocating from one place to another was to ensure that they don’t wreak havoc on the people during the day while relocating to other towns. I expected the state government to have taken care of these in the new law rather than total banning.

“What the state government ought to have done is to allow whoever wants to relocate at night to take permit from a certain government’s authority or inform their Seriki (their leader), but banning them from moving at night may not help the situation, it will make their job difficult,” Imam said.

Also, the Seriki of the association in Ekiti, Alhaji Ahmadu Mahmoud, appealed to the governor to amend the new law, to allow his members to carry lesser arms to ward off attacks during grazing.

Mahmoud, who agreed with the time for grazing, however, criticised the outright banning of night movement, saying it would make their jobs difficult and create more confusion.

“We agree with the governor on the grazing period of between 7am and 6pm, but we should be allowed to carry lesser arms and relocate at night.

“How can somebody who wants to carry his cattle numbering hundreds from Ekiti to  places  like Lokoja, Ibadan or Ilorin moves  during the day? These places are densely populated and it will create traffic congestion and confusion everywhere. The government must look into all these,” he added.