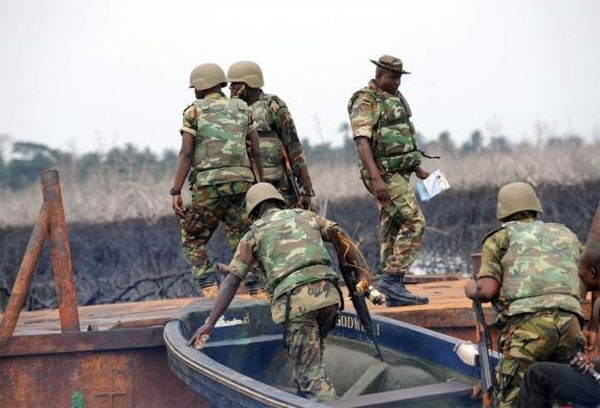 The incident occurred along the Brass waterfront in the Brass Local Government Area of the state.

Service rifles belonging to the missing soldiers were also said to be missing.

It was learnt that the sad incident, which occurred at about 10am on Monday, created panic among newly-deployed soldiers in the state.

Though the mission of the soldiers in the area could not be ascertained, it was gathered that it was not unconnected with the operations against renewed militancy, sea piracy and search for those threatening to hoist the ‘Niger Delta Republic’ flag.

An indigene of the community, identified simply as Etta, said attempts by community youths and other soldiers to assist in a rescue operation failed as the drowned soldiers could not be found.

Etta said, “In recent times, we have been noticing increased movement of soldiers in our area. The boat that capsized was conveying a new batch of soldiers to the waterfront.

“I was going to dispose of refuse at the waterfront and I saw uniformed soldiers struggling to rescue their colleagues in a capsized boat.

“When the confusion subsided, four soldiers were found to be missing with their rifles and other military gear. Those that were rescued had their rifles missing and struggling out of the water.”

It was further learnt that as of 2pm, the military authorities sought the help of local divers and youths in the search for the missing soldiers.

But one of the youths confirmed that the high tide of the water impeded the search for the missing soldiers.

The state Chairman of the Maritime Union, Mr. Lyyod Sese, who confirmed the incident, said the union had not received the report on the boat incident.

“We do not have details of the number of casualties,” Sese said.

An official of the Brass LGA, who spoke on condition of anonymity, also confirmed the development.

Attempts to get confirmation from the Joint Military Task Force,  Operation Delta Safe, were not successful as calls to the Acting Coordinator of the Joint Media Campaign Centre, Lt. Cmdr. Thomas Otuji, were not returned.