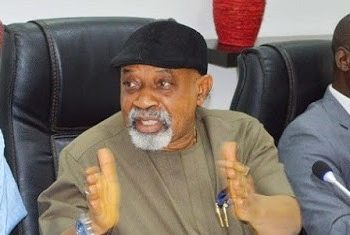 The United Labour Congress (ULC) has complained that Minister of Labour Dr Chris Ngige’s directive to the Nigeria Union of Petroleum and Natural Gas Workers (NUPENG) to submit its finanacial report within 72 hours is unrealistic.

In a statement, ULC President Joe Ajaero said the May 13, letter in which the ministry demanded that NUPENG should submit within 72 hours, audited reports of its accounts for 2017 and 2018, was unacceptable.

The statement reads: “The rules are very clear regarding such requests by the ministry. The law provides for 30 clear days instead of the three days demanded by the operatives of the Ministry of Labour. When laws are flagrantly disregarded by those who are supposed to be its custodian, it raises other questions. If the request was for the purposes of probity and standards in the industry, why resort to impunity in pursuing it or perhaps, there is an indecent haste to achieve a devious end?

“We strongly condemn this apparent scapegoating of NUPENG. It is selective and is designed to cow the union into submission. This is a tool that we abhor and should not be encouraged within the nation’s industrial relations arena where we ought to see the parties: government, employers and workers as social partners. The Ministry’s request is illegal and runs counter to our traditions and practice as industrial relations parties.”

Ajaero said whatever may have been the provocations, the union expected the Federal Ministry of Labour to be cautious.

He said actions that against the ethics of its engagement should not be an option as it sought to resolve any grievance.

He said: “ULC cannot fold its arms and watch NUPENG, a very strong affiliate of it, harassed by others over a matter that can be handled more responsibly and amicably by all parties. To this end, we are exploring avenues to seek more sensible and amicable resolution of all issues involved to avoid plunging this nation into a disastrous industrial unrest with unimaginable consequences.”

Meanwhile, NUPENG leadership has condemned the threat by Ngige, to proscribe the union.

Its President, Comrade Williams Akporeha, said it was not surprised by the move of the minister going by the reactions to the organised labours.

The union said this was evident given the peaceful rallies and picketing of places of interest to the minister over his failure to inaugurate the Board of the Nigeria Social Insurance Trust Fund (NSITF) with Comrade Ovie Frank Kokori as chairman and the use of armed thugs to attack labour leaders.

“It is shameful that the Minister of Labour had to condescend so low by issuing a directive to NUPENG to produce its only outstanding financial returns for 2018 within 72 hours when the extant law stipulates 30 days, and even when such returns are supposed to be due by June 31, 2019. We have it from good authority that he has further carried all our files right from the inception of our union (1978) to date in a bid to fish out phantom reasons he intends to use in proscribing the union,” he said.

The union wondered why only NUPENG was instructed to submit its report.