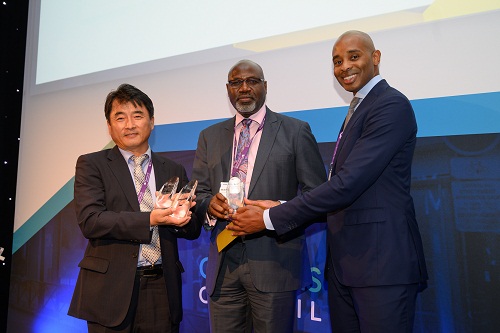 Samsung Heavy Industries Nigeria (SHIN) has received the ‘Project of the Year’ award at the African Assembly, organised by the Oil & Gas Council in Paris.

SHIN received the award, along with its client, Total, for the Egina Floating Production Storage and Offloading unit (FPSO), which will add 200,000 barrels of crude oil per day (bpd) to Nigeria’s daily oil production.

Together, the companies received not one but two awards – 2018’s ‘Breakthrough Deal of the Year’ and 2019’s ‘Project of the Year’.

Receiving the award, the Chief Executive Officer of SHI-MCI FZE, the joint venture of SHIN, Mr. Dongseong Suh said: “It is proof of our collective philosophy that responsible investment, powered by a belief in people, can drive real change. Nigeria can stand tall in the world. It is now home to a world-class fabrication and integration yard. Together we have proved that Nigeria’s local content rules work. They can be the platform that delivers shared economic success for ordinary Nigerians, for the country as a whole. That’s why this award is so important to not only to Samsung Heavy Industries Nigeria but for the nation of Nigeria. I thank you, and I accept this award with honour and pride.”

The Council, an influential international network of global oil and gas company executives, organises multiple meetings, including the annual Africa Assembly, which is recognised as the region’s most influential corporate development, strategy, finance and investment gathering.