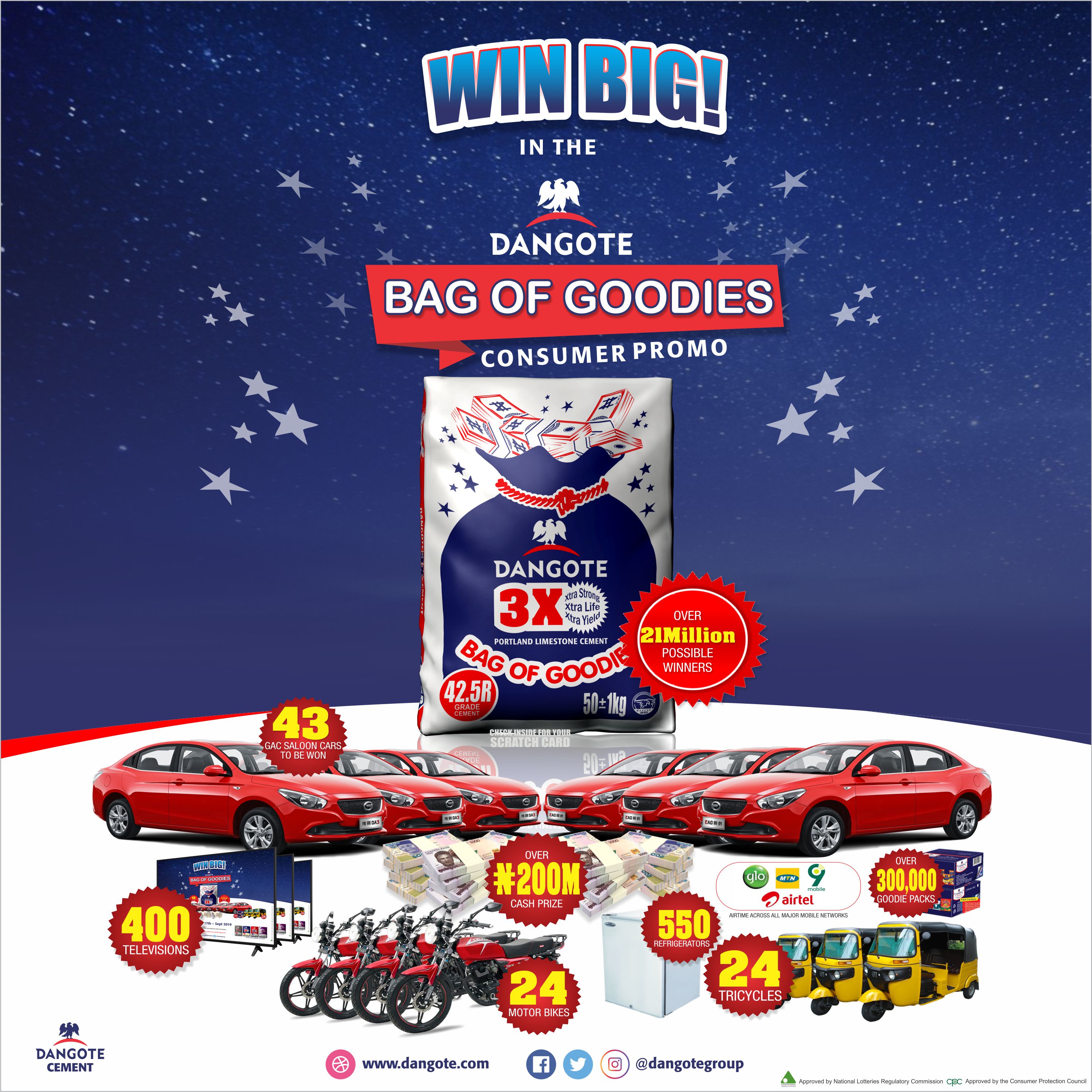 In an unprecedented move to empower millions of its product consumers economically, leading cement manufacturer, Dangote Cement Plc yesterday launched a jumbo consumer promo tagged “Dangote Cement Bag of Goodies”, which is designed to produce 21 million winners across the country.

The promo, which runs between July and September in which prizes worth billions of Naira would be won, was formally unveiled to the media at a news briefing in Lagos. Lucky consumers are to win 43 cars, 24 tricycles, 24 motorcycles, 550 refrigerators, 400 television sets, 300,000 Dangote foods goodies packs and recharge cards for all networks worth N200,000,000.00

While unveiling the promo, the Group Managing Director of Dangote Cement Plc, Engr. Joseph Makoju, who was represented by the Group Executive Director of Dangote Industries Limited, Knut Ulvmoen said the company decided to run the biggest promo ever in Nigeria as a way of contributing to the economic wellbeing of the consumers of its products given the prevailing economic situation.

He said the promo is to reward valued consumers for their unflinching partnership in ensuring that our range of cement products remains today the first choice for construction purposes across the country, and added that the consumer promotion gives opportunities for existing and new consumers to get a step ahead of their struggle for economic emancipation by winning any of the give-away items which has economic value.

“We have made it so transparent that you don’t have to go through any raffle or draw associated with many other promotions in the country. You win instantly because what is revealed in the scratch card is what you win”, he stated.

Explaining why Dangote Cement launched such a humongous promo, Mr. Knut explained that Dangote Cement is the largest in Africa with the largest production capacity and therefore decided to reward the consumers in the biggest way ever experienced in the country. Mr. Aliko Dangote who is the richest man in Nigeria own Dangote cement, in fact, he became one of the richest people in the world through Dangote Cement.

In her presentation on the promo, Dangote Cement Marketing Director, Mrs. Funmi Sanni stated that “Consumers are at the heart of what we do; without them there is no business. Consumers are important and a fundamental factor of production without which production process is incomplete and our ability to remain in business becomes impossible.

“To grow our business, we must constantly create value in terms of quality product and service, competitive pricing and depositing in consumers’ emotional bank accounts in order to become their preferred choice of brand at the point of purchase.”

The Marketing Director said as a business, the management of Dangote Cement recognizes the importance of every member of its value chain, distributors; wholesalers; and retailers, “and as such we have invested in growing their businesses through various empowerment schemes.”

According to her, the new Dangote cement promo bags have been shipped to all distributors and sellers nationwide and therefore there is no fear of scarcity of the new cement product.

She added that “every promo bag of cement contains a scratch card carrying winning items carefully inserted in each bag. Consumers need to be educated to scratch gently so as not invalidate their wining card.” She disclosed that the promo cuts across all Dangote Cement’s brands which include 3X, Falcon and BlocMaster.

Mrs. Sanni explained that the consumer promo was in line with the mission of the company which is to touch the lives of the people by providing their basic needs, and pointed out that the consumer promotion is another huge investment to help the customers improve their rate of sales and make more profit while at the same time improve the consumers’ quality of life. “We are doing this for the sake of our consumers who have not really benefitted much from our previous promo.”

The promo was also endorsed by the National Lottery Regulatory Commission. The Deputy Director and Coordinator of the Lagos Liaison Office of the NLRC, Mrs. Nkiru Onuzulu said the promo had been approved and registered with the Commission and can assure that it would be transparent, free and fair all through the processes.

“I can assure you that what you win is what you will get because we are monitoring and regulating the promo, and given the calibre of the company running this promo which is Dangote Cement, there won’t be any undercut.”

Also attesting to the inherent transparency in the promo, President of Blockmakers Association of Nigeria, Alhaji Rasidi Adebowale said Dangote has done a lot of promos that benefited the blockmakers in the past where there was no issue. He said this cannot be an exception.