Police have arrested 18 pro-Biafran agitators while celebrating the 17th anniversary of the creation of the Movement for the Actualisation of Sovereign State of Biafra in some states in the South-East geopolitical zone. 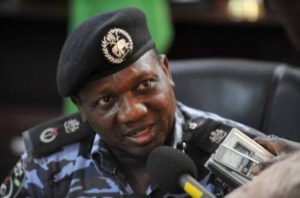 The agitators were celebrating the 17th anniversary of the existence of the MASSOB.

The Police Public Relations Officer in the state confirmed the arrest.

She said 13 of those arrested were males while one was a female.

She said they were arrested for their conducts likely to cause the breach of peace.

Soldiers mounted road blocks at different locations in Onitsha and its environs to monitor the procession of the agitators of the Biafra Independent Movement.

This made vehicular movement in and around Onitsha difficult.

Reacting to the harassment of its members by security agencies, BIM warned the Federal Government not to provoke it into resorting into violence.

The Joint Security Task Force set up by the Anambra State Government which comprises soldiers, police, navy and civil defence, among others, cordoned off parts of Onitsha while the march lasted.

There were reported cases of shootings.

The BIM members were seen chanting songs while on the anniversary procession.

Anambra North Zonal Leader of the group, Emmanuel Omenka, while addressing its members, urged them to exercise patience as “the day of freedom is near.”

He said, “The present call for restructuring by some segments of the country came about as a result of the fear for the Biafran independence by those who have tied the country down”.

“Going by the numerous times of unprovoked attack on our members by the Nigerian security forces, we may resort to violence.

“The fact that we chose non-violence is not out of cowardice but to maintain the pact Uwazurike signed with the United Nations.

“No amount of restructuring gimmick can make BIM and MASSOB derail from their agitation for a sovereign state of Biafra.”

Anambra Central Zonal Leader of BIM, Chief Vincent Iloh, said, “The Nigerian government should allow the Biafra agitators have their own independent state, since the amalgamation of Nigeria in 1914 by our calculation had expired in 2014.

“Let the whole world know that we are resolute in our stand for a Biafra Republic. It is not compulsory that we shall remain one indivisible nation. Therefore, they should allow us to go to our Promised Land.

“We will not fail to praise the resilience of Chief Ralph Uwazurike who started the struggle on September 13, 1999. We want to remind those working to destabilise the struggle that they can never succeed, because 17 years is not 17 days, even as we are not ready to relent or relinquish the struggle”.

In Abia State, about four persons were reportedly arrested by the police in Umuahia, the state capital, for taking part in the 17th anniversary of MASSOB.

Members of MASSOB defied the rain to mark the anniversary.

The event started with a prayer session at its zonal secretariat in Umuahia, before a peaceful procession round the state capital.

But few hours after the procession, the MASSOB-BIM zonal Information Director, Anselam Ogbonna, alleged that about four of their members were arrested by the police.

He also alleged that about four Nigerian Police (Hilux) vans, with one having NPF6619C number, stormed their secretariat and seized the Biafran and Israeli flags hoisted there.

Meanwhile, the MASSOB also marked its 17th anniversary of existence on Tuesday.

It renewed commitment towards actualising Biafra republic without violence.

MASSOB leader, Uchenna Madu, said in a statement in Awka that the Biafra agitators were using the occasion to remember those who lost their lives in the course of the struggle.

Madu said, “Today, as we celebrate the 17th anniversary of the formation of MASSOB, we remember our brothers and sisters whose lives were cut shot because of Biafra in the hands of security agents.

“We remember our non-violent MASSOB members, who died innocently and with brave hearts for the Biafra cause.  They were molested, mesmerised, humiliated and brutally killed by the armed security agents of our oppressors.

“Today, we the remnants of genuine MASSOB activists also remember the parents of our fallen heroes. Some are still traumatised and some died because of shock while others are living ghost of themselves.

“MASSOB still remembers our dead members who are still in mortuaries for the past 10 years. They were brutally killed in Onitsha in June 2006, during an order of shoot-at-sight against armless MASSOB members.”

Madu said it had come to the notice of MASSOB that some members of the Biafra Indigenous Movement, led by the former MASSOB leader, Chief Ralph Uwazuruike, were also marking the anniversary. He said while the movement was not against such participation, it should be on record that only one MASSOB, led by him, exists. He said MASSOB has its headquarters at Okwe in Imo State.

He added, “While MASSOB acknowledges other Biafrans in celebrating with us, we counsel the confused and brainwashed members of Uwazuruike’s BIM to understand their stand in the struggle. A group of people cannot be MASSOB and BIM members at the same time under the leadership of two different persons.

In Cross River State, at least 200 members of MASSOB held procession along major streets in Ikom to mark the 17th anniversary of the pressure group on Tuesday.

The members, who came in from Ogoja, Ugep, Obubra, Obudu and Abi local government areas of the state, converged at the Ikom Township Stadium, before parading the streets, chanting victory songs and Biafran anthem.

Zonal Leader of MASSOB in Cross River State, Mr. Samuel Okah, who led the parade, said the event was to mark 17 years of peaceful struggle for the actualisation of a nation for the people of Biafra.

He said, “It has been 17 years of peaceful agitation by the people of Biafra, led by Chief Ralph Uwazurike, and we are making steady progress for the coming to fruition of our efforts. This is a clear demonstration of the fact that peaceful efforts could get more mileage than violence.”