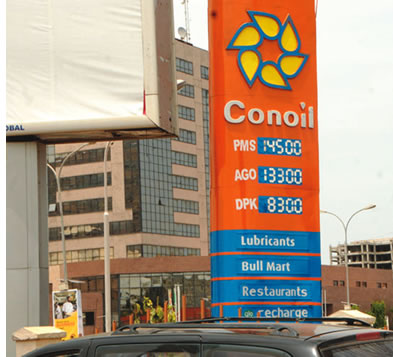 The move by Conoil Plc,  a petroleum downstream player, to pay N2bn dividend for the 2015 financial year, has been approved by shareholders of the company as well as other stakeholders.

The shareholders of the company commended the company’s resolve to pay such dividend despite the prevailing economic challenges in the country.

The final dividend payout ratified at the Annual General Meeting of the company held in Uyo, Akwa Ibom State, translates to N3.00 on every 50 kobo ordinary share for the 2015 financial year, compared to N1.00 paid the previous year.

The President, Renaisssance Shareholders’ Association, Olufemi Timothy, expressed surprise at the performance, amid tight liquidity, rising cost of funds and the general tough operating environment in the downstream oil sector.

In the same vein, the Founder, Independent Shareholders Association of Nigeria, Sunny Nwosu, appreciated the board and management of the company for growing profits and increasing dividend payment, despite the harsh economic environment.

Also commenting, the President, Nigerian Shareholders Solidarity Association, Timothy Adesiyan, said, “Conoil has shown that it is not only concerned about making profits but that it has the interest of shareholders at heart.”

In his address to the shareholders, the Chairman of the company, Dr. Mike Adenuga  Jr., promised that Conoil would further consolidate on the gains recorded so far, and ensure better returns in the coming years.