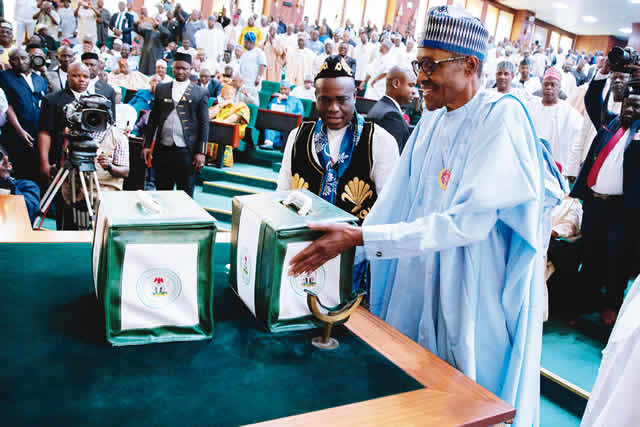 The Senate has said Nigerians should not blame the National Assembly if it is unable to meet the December target for the passage of the 2018 Appropriation Bill.

President Muhammadu Buhari had presented the 2018 Appropriation Bill to a joint session of the Senate and the House of Representatives in Abuja on November 7, 2017.

The executive had requested that the 2018 budget be passed and assented to by the President before the end of the year to allow its implementation to take effect from January 2018 as part of the plan to return to the January-December budget cycle.

The Chairman, Senate Committee on Media and Public Affairs, Senator Aliyu Sabi-Abdullahi, while briefing journalists in Abuja on Wednesday, alleged that the non-appearance of the Federal Government officials at the public hearing on the 2018-2020 Medium-Term Expenditure Framework and Fiscal Strategy Paper on Tuesday had slowed down the process.

“For the budget, what we are trying to say is that it is serious enough for all of these chief executives to honour the National Assembly with their presence so that we can look at these issues critically. In doing so, they will be honouring the request by their principal and our overall President and Commander-in-Chief, President Muhammadu Buhari,” he stated.

Sabi-Abdullahi said the non-cooperation with the legislature was getting from the executive forced the Senate to inform Nigerians of the looming crisis on the budget.

He stated, “We want to report that the Senate is disturbed by a new trend where heads or chief executives of critical institutions who should play a critical role in this budget process choose to ignore the invitation by the Senate to appear before it for deliberation.

“The question to ask here is this: if the national budget is very important and all of us depend on the resources of the country to run our business, what other business could be more important than looking at this very critical assignment for this country?”

The Senate’s spokesman described the representatives being sent by heads of government MDAs as “powerless” as they usually could not answer critical questions or provide critical insight, which he noted was as good as not showing up.

Sabi-Abdullahi added, “It is important that we report this because, overall, the media will still come back to us asking what progress are we making and why are we slow in taking decisions. I must make this very clear, we are trying our best and we want to see what progress we can make but we are constrained by some of these types of decisions or actions by some chief executives from the executive side. Let it also be said that some people are not giving maximum cooperation to the National Assembly for us to do our job.

“For example, on the issue of revenue projections, where there are shortages, we will look at the performance in 2017 to see what informed the projection for 2018. But where these people are not there, how do you get answers to the things that agitate your mind? We are worried about this development and we want to urge all those who are responsible for some of these critical assignments to begin to realise that when the National Assembly is calling them, it is a national duty; it is a constitutional duty and they must take it seriously.”

When asked if the December target for the passage of the budget was still feasible with the complaints against the Federal Government, he expressed uncertainty.

Sabi-Abdullahi said, “It is in anticipation of these kind of questions that we are reporting back to you the hurdles we are meeting in the process; when the National Assembly seeks for answers from the executive, I think we should get those answers. That way, the process will not be impeded.