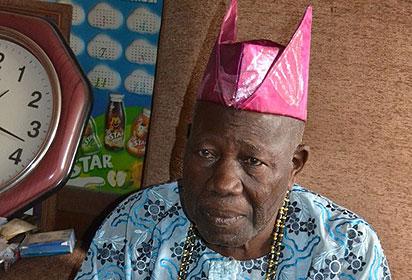 The Olubadan of Ibadanland, Oba Saliu Adetunji has lost one of his senior wives, Kudirat Aduke. Queen Aduke died on Thursday at the age of 71, a statement by the Director , Media and Publicity to the Olubadan, Adeola Oloko said. Balogun of Ibadanland, Chief Saliu Adetunji According to the statement, “The Olori passed away in the early hours of Thursday December 21 , 2017. Until her death, she was the Iyaloja of Bolade , Oshodi Market , Lagos.” “She will be buried today (Thursday) at the Popoyemoja , Ibadan palace of Olubadan of Ibadanland at 4 p.m. according to Muslim rites . “She is survived by her husband , many children and grandchildren.” Meanwhile, Governor Abiola Ajimobi of Oyo State, in a condolence message,  said he was saddened by the news of the loss. He said the death of the late Olori is a big loss to the entire people of Ibadanland. “I am greatly saddened by the passing away of Olori Kudirah. It is very unfortunate and disheartening, especially because we were still together with Kabiyesi and the royal retinue at the Chief of Army Staff conference, held in Ibadan, last week,” he said. “Her death is indeed a big loss, not only to our father, the Olubadan, His Imperial Majesty, Oba Saliu Adetunji, but also, to the entire people of Ibadanland. May the Almighty grant Kabiyesi, Mama’s children and loved ones the fortitude to bear this great loss. “I enjoin the good people of Oyo State to join me in praying for the repose of her gentle soul and may Allah grant her the highest place in Jannah.”