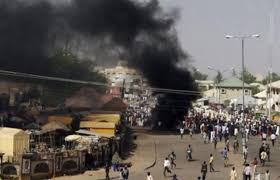 At least eight people were killed when a suicide bomber blew himself up among protesters in eastern Afghanistan on Tuesday, an official said, in the latest violence to hit the country.

Another 35 were wounded in the blast in Nangarhar province, where people had blocked a highway in protest over the appointment of a local police chief, provincial governor spokesman Ataullah Khogyani said.

“Dozens of wounded people have been brought to Jalalabad hospitals so far,” Miakhil added.The attack came hours after a double bombing in front of a girls’ school in the provincial capital of Jalalabad killed a boy and wounded four others.

The first explosion happened in front of Malika Omaira girls’ school at around 8:30 am (0400 GMT), Khogyani told AFP earlier.

A second bomb went off as students from a neighbouring boys’ school and locals gathered at the scene, he added.

There has been no claim of responsibility for any of the attacks, but the Taliban and the Islamic State (IS) group are active in Nangarhar, which borders Pakistan.

An uptick in violence across Afghanistan in recent weeks has claimed the lives of hundreds of civilians and security forces, as the Taliban makes gains on the battlefield and IS launches deadly urban attacks.

The fighting has dampened optimism that had been tentatively growing as Afghan and international players ratchet up efforts to convince the Taliban to negotiate an end to the 17-year conflict.

An unprecedented ceasefire in June followed by talks between US officials and Taliban representatives in Qatar in July raised hopes that peace negotiations could bring an end to the fighting.

There is speculation the two sides will meet again this month.

The Taliban have long insisted on direct talks with Washington and refused to negotiate with the Afghan government, which they see as illegitimate.

The intensified fighting has also fuelled speculation over whether Afghanistan’s long-delayed parliamentary elections will go ahead on October 20.

Afghanistan’s already over-stretched security forces will be tasked with protecting thousands of polling stations around the country at a time when they are already struggling to beat back insurgents.

Taliban fighters killed nearly 60 members of the security forces in a spate of attacks in the country’s north on Sunday night.