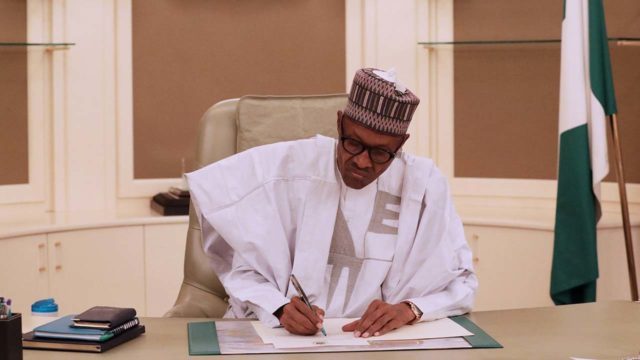 Barring any last-minute change in plans, President Muhammadu Buhari will on Monday (today) give his assent to the 2019 appropriation bill.

The assent of the President will officially make the bill become law and signal the commencement of the 2019 fiscal budget.

The development was confirmed by a top official in the Budget Office of the Federation.

The official, who pleaded not to be named as he was not officially permitted to speak on the matter, explained that details of the signed budget would be made available during a public presentation on Tuesday by the Minister of Budget and National Planning, Senator Udo Udoma.

Already, the minister had sent out invitations for the event.

The invitation read in part, “Dear Sir/Ma, On behalf of the Honourable Minister of Budget and National Planning, Sen. Udoma Udo Udoma, CON, the Director General, Budget Office of the Federation hereby invites you to a public presentation of the approved FGN 2019 Budget scheduled as follows: Date: Tuesday, 28th May 2019; Time: 10:30 am; Venue: Main Auditorium, Federal Ministry of Finance, CBD Abuja.”

A presidency source, who also confirmed the signing, told one of our correspondents that the signing of the budget would be performed by the President “around 10 am at the villa.”

Buhari had laid the budget on December 18, 2018 on the floor of the National Assembly but certain extraneous forces such as the Christmas and New Year breaks as well as the general election had affected the quick passage of the appropriation bill.

When the bill was presented by the President to the National Assembly, the sum of N8.83tn was proposed.

It was made up of N4.04tn for recurrent expenditure, N2.03tn for capital expenditure and N2.14tn for debt servicing, among others.

However, after undergoing legislative scrutiny, the lawmakers on April 30 passed the 2019 budget of N8.91tn, raising it by over N90.3bn.

Highlights of the 2019 budget as approved by the National Assembly include the capital expenditure of N2.09tn, recurrent expenditure of N4.05tn, statutory transfers of N502bn, fiscal deficit of N1.9tn, and special intervention of N500bn.

The lawmakers also approved debt service of N2.25tn. Out of the figure, N1.7tn was approved for domestic debts, while the sum of N433bn was provided for foreign debts.

Similarly, the sum of N110bn was approved for a sinking fund to retire maturing debt obligations.

In recent times, there had been a delay in the passage and signing of the Federal Government budget due to disagreements between the executive and the National Assembly.

As a result of the power tussle between the executive and the legislature, the budget implementation had always commenced very late into the year.

The 2017 budget, which was submitted to the lawmakers in December 2016, was not passed and assented to until June 2017.

The 2018 budget, which was designed to consolidate on the Economic Recovery and Growth Plan, was presented to the National Assembly on November 7, 2017.

It was passed by the lawmakers on May 16, transmitted to Buhari on May 25 and assented by him on June 20.