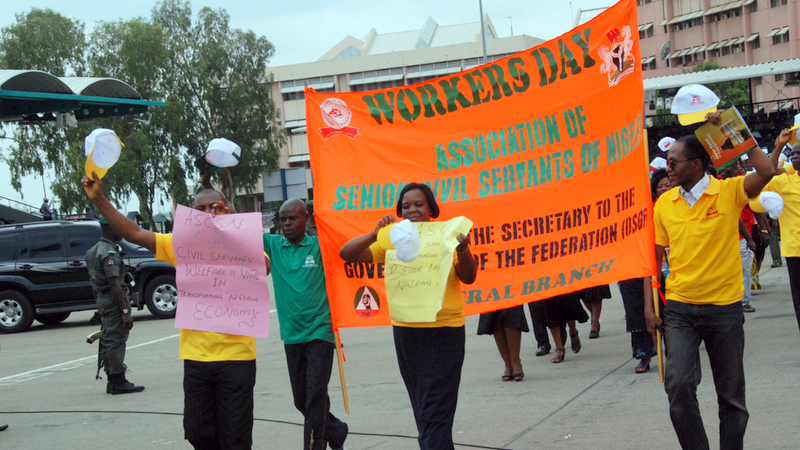 The Nigeria Labour Congress (NLC) and the Trade Union Congress of Nigeria (TUC) have jointly proposed and presented N56, 000 as the new minimum wage to the Federal Government.

The NLC president, Ayuba Wabba, said this at a news conference on Wednesday in Abuja.

Mr. Wabba said both the NLC and the TUC made the formal demand on the proposed national minimum wage to the Federal Government on Tuesday.

“I can say now authoritatively that as of yesterday (Tuesday) we made a formal proposal to the Federal Government of N56, 000 to be the new minimum wage.

“The demand has been submitted officially to government and we hope that the tripartite system to look at the review will actually be put set up to look at it.

“Our argument is that, yes, it is true that the economy is not doing well, but the law stated that wages for workers must be reviewed after every five years.

“So, the issue must be looked into by the Federal Government and workers should not be seen as sleeping on their rights, ”he said.

He said it was imperative that the government should set up the tripartite committee for the review of the new minimum wage.

Mr. Wabba said this was the only way the representatives of unions and government would fashion out the negotiation process at a roundtable.

According to him, the logic behind the new minimum wage is to ensure that no worker earns below what can sustain him or her for a period of 30 days.

“You also know that when we negotiated the N18, 000 minimum wage, the value in terms of exchange rate at that time was almost at N110 to the dollar.

“But as at today, the value of the naira to the dollar has been reduced; and there are the issues of inflation and purchasing power, among others to contend with.

“So, it also about the law of the review of the wage, the law envisaged that within a circle of five years, there must be a review,” Mr. Wabba said.

Mr. Wabba called on the government to ensure that the issue of the national minimum wage was urgently taken on board as way of fighting corruption in the country.

He said if employers failed to cater for their workers’ welfare adequately, it would be difficult for such an employer to fight corruption.

The NLC president said workers needed to be empowered financially to have the purchasing power to buy what they would need to survive.

“If manufacturers are producing and nobody is buying, the economy will be at a standstill because people lack the purchasing power to buy.

“So, these are some of the issues we will be pushing forward at the negotiation table and there must be a tripartite committee to look at the challenges, ”he said.