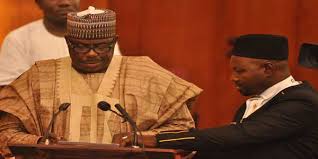 The Minister of State, Power, Works and Housing, Mr Mustapha Shehuri ‎said yesterday that the federal government is working towards generating 25,000megawatts (mw) in the next four years.

But President Muhammadu Buhari also said yesterday that his administration had set a target of delivering 10,000 megawatts of electricity generation in the next three years.

The president, who stated this while addressing the National Economic Council retreat held at the State House, Abuja, said this year alone the administration would add 2000 megawatts to the national grid.

The minister spoke in Abuja at the induction of 100 trainees of the National Power Training Institute of Nigeria (NAPTIN).

He said the target would be achieved by 2020 adding that the military era had not invested in the power sector especially on human capacity.

“Nigeria’s plan is to continually increase the level of electricity generation to the target of 25,000mw by the year 2020. This can only be achieved through a robust infrastructural development accompanied with a competent technical workforce,” Shehuri said.

The new pronouncement by the Minister is despite the current less than 4,000mw power generation. Operators had projected 5,000mw by February 2016 with a rise in electricity tariff.

But for a day of 5,070mw peak ‎generation on February 2, 2015, the grid had continued to suffer decline. It hit an all time low of 2,000mw this March due to poor gas supply to the power plants.

Earlier a former Permanent Secretary in the then ministry of power, Engr. Abdullahi Aliyu said training for fresh staff which used to be two years from 1972 under NEPA was stopped in 1990 due to lack of funding during the military era.