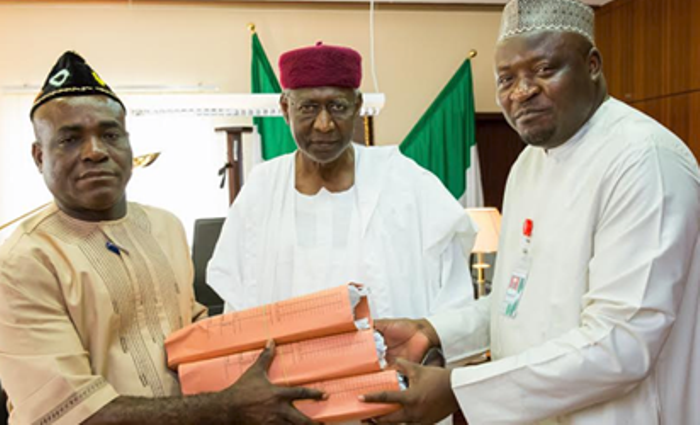 ABUJA — THE lingering controversy surrounding the 2016 Appropriation Bill has been finally put to rest as President Muhammadu Buhari will get the clean copy of the budget today. Since last week, Senators and members of the House of Representatives have engaged in marathon meetings up till yesterday to put finishing touches to the budget for onward submission to President Muhammadu Buhari for assent.

File: Chief of Staff to President Buhari Abba Kyari receives budget from Senior Special Assistant to President on National Assembly matters Senator Eta Enang and Hon. Kawu Ismaila in Statehouse on 7th April 2016 As part of moves to end the impasse, the leadership of the National Assembly and a select group from the executive arm of government began a meeting yesterday, primarily to arrive at a consensus on the final and clean copy of the budget. According to a source, the meeting was agreed on by both camps and coordinated by the Minister of Budget and National Planning, Senator Udoma Udo Udoma.

The source said further that the meeting had one agenda: to make an appropriation bill that would be clean and made available for presidential assent today. Prior to the meeting, which was held outside the National Assembly, the delegation from the National Assembly had met with the leadership of the Assembly to get a final position to be presented at the meeting. It was also gathered from a source close to all the arrangements to get the budget issues resolved, that the grey areas were being gradually reduced to the satisfaction of all parties . A member of the committee from the Senate in a text message to Vanguard, yesterday, said as Senators, they were not happy as other members tampered with the budget and disclosed that the decision was to do everything the President wanted. “We are going to do everything Mr President wants. This is because our colleagues disappointed us by tampering with the budget at the reconciliation level. We don’t want to be used as an excuse for any failure,” the member said. Vice President Yemi Osinbajo had, last weekend, assured Nigerians that President Buhari would this week sign the bill into law.

A Presidency source, who was cornered yesterday to speak on the development, said: “We have received a copy for preview. We are meeting with them, about 3 to 4pm, because it was to be consensual working. “Ministers will look at what they have done so that it will be agreed fully that this is what will be presented. The assurance that budget would be signed today will be kept because the Vice President is the head of the economic team. “The grey areas are being eliminated one by one and Nigerians will be happy when the budget is passed. They are being eliminated and reduced. It will be a budget for Nigeria made by Nigerians.” According to the source, the executive wants to make sure that the budget meetings and discussions are done properly so as to keep each other’s powers intact. He said:

“The executive has its powers, very enormous. The small powers of the legislature should be preserved. So in matters like these, it is the legislature that is the Oga.” “So, we the executive have to respond. We are the ones begging them to pass budget. Therefore, they approve of the venues of the meetings.” It would be recalled that the National Assembly had on Wednesday, March 23, 2016, passed the 2016 Appropriation Bill submitted by President Muhammadu Buhari in December last year.