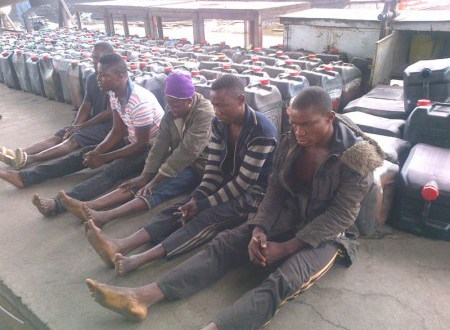 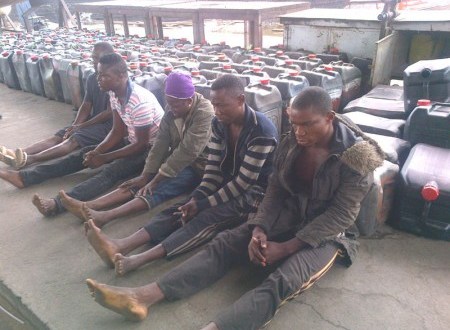 The Pipelines and Products Marketing Company, a subsidiary of the Nigerian National Petroleum Corporation, has recovered over 1,500 jerrycans of petrol siphoned by vandals at Ogere Waterworks in Ogun State.

Topline Leighton, a private security which monitors and patrols PPMC’s pipelines along the System 2B, said the discovery of the oil theft was made on Monday.

The Security Coordinator, Topline Leighton Limited, Mr. Adetona Adigun, said the private pipelines surveillance firm was engaged by the PPMC to monitor the NNPC/PPMC System 2B products pipelines from Atlas Cove Depot in Lagos to Mosimi in Ogun State and other areas in South-west region.

Adigun, who addressed journalists at Ogere Waterworks, said the firm had made a series of discoveries of fuel theft from the System 2B network, which accounts for 60 per cent of petrol supply in the country.

“We have achieved a landmark, which nobody has made, here at Ogere Waterworks in Ogun State. Over 1,500 of jerrycans full of petrol were seized from vandals, together with their equipment.

“This is our commonwealth, and with the collaboration of other security agencies – police, Navy, Civil Defence Corps, we are ready to match them in ensuring that our national assets are secured. It is not going to be business as usual.’ he said.

He said that three suspected vandals were arrested, adding that they would be handed over to the appropriate security agency for prosecution.

“All the arrests that we have been able to make have kept the vandals at bay. We have been having products pumped from Lagos to Mosimi, to Ibadan and to Ilorin. So, now our next line of action is to expand our operations.

“On December 25, 2015, we made a discovery in Ajebo, Ogun State that made the Managing Director of PPMC to come around. We also made another discovery at Ilase and at Robert Island Village, close to the Atlas Cove.