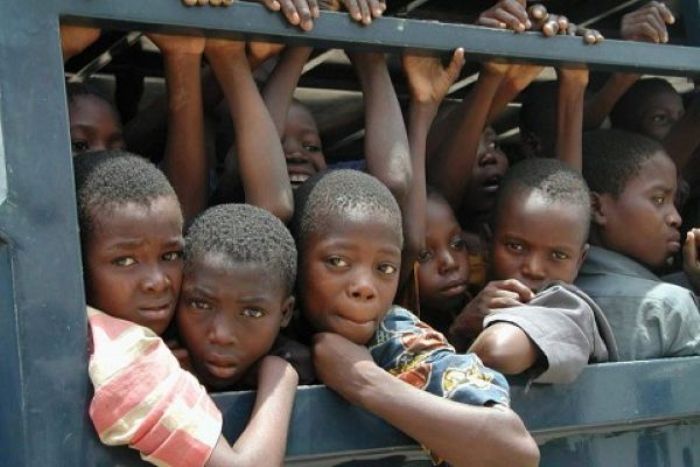 710 children rescued from traffickers in Ibadan

The Ibadan Justice, Development and Peace Commission, JDPC, has rescued no fewer than 710 children from child traffickers in Ibadan metropolis in the last one year.

Head of Programme, Women Development and Child’s Rights programme, an arm of JDPC, Mrs. Omotayo Mala-Adebayo, disclosed this yesterday at a oneday stakeholders’ meeting tagged, ‘Awareness Creation and Campaign Against Child Trafficking and Labour.’ The meeting was attended by religious leaders, traditional rulers, representatives of security and enforcement agencies including the Nigeria Security and Civil Defense Corps, NSCDC, Federal Road Safety Corps, FRSC, Nigeria Customs Service, Nigerian Immigration Service, NAPTIP and media organisations. Mala-Adebayo, who revealed that most of the school-age minors were rescued in areas like Dugbe, Gbagi, Bodija and Ojoo markets, Dandaru Cultural centre, Ayeye, Ogunpa and Agbaje, maintained that child trafficking and child labour was still rampant in Ibadan, due to low level of awareness about the dangers of the menace.

She said in the last 12 months of aggressive campaign and enlightenment by the commission, it has also re-united about 378 children with their families, adding that they were doing well in their various homes. While calling on all stakeholders in the society to support the activities of the organisation, she said no fewer than 252 children were on its scholarship for a better future.

Programme Officer of WDP, Mr. Ayo Olanipekun, also revealed that 11 families had been reunited, adding that the organisation has concluded plan to give educational support to 400 indigent children in the city.

Director of JDPC, Rev. Father Ezekiel Owoeye, said all hands must be on deck to fight the menace of child trafficking, urging those perpetuating the act to desist or face the full wrath of the law.

In a communiqué issued after the event, the JDPC among others declared child exploitation as inhuman behaviour while also urging all stakeholders to prevail on the government at all levels to make primary education free for all.