Stakeholders in the aviation industry have lauded one of Nigeria’s flag carriers, Med-View Airline, for its giant strides, especially on the international front. 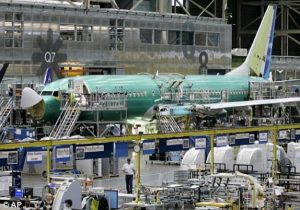 The commendation is not unconnected with the airline’s acquisition of a new Boeing 777-200, shortly after taking delivery of a super jumbo 747 as additions to its fleets.

The feat, stakeholders said, was most “courageous” particularly at a time the sector is buckling due to pressure of economic recession.While the 747 has since been deployed to the Lagos – London Gatwick route, the triple-seven aircraft on Monday airlifted pilgrims from Lagos to Saudi Arabia for the commencement of the 2016 Hajj operations. No fewer than 150 flights operations are expected to be carried out while the Hajj exercise lasted.

Regional Manager of British Airways, Kola Olayinka, said the Med-View management had again demonstrated the resilience of the Nigerian spirit to survive all odds.

Olayinka said: “Nigeria is very active country of people that cannot be put down. No matter what is thrown at us, we will struggle and make a come back.

“That is why I salute the courage of Nigerian airlines. Notwithstanding what is happening to us on all fronts, Med-View is still able to bring in a 747-400. I feel proud to see a 747 aircraft that is not borrowed, with Nigerian flag on it at Gatwick, London. That is enormous joy for me as a Nigerian,” he said.

Bankole, during a courtesy visit to the Med-View management, disclosed that the association would in September organise an eminent persons’ lecture in honour of the Med-View boss whose airline now ferries passengers from London Gatwick three times weekly into Nigeria with a Boeing 747 aircraft.

NANTA boss told an elated Med-View airline boss and his top managers that Nigerian travel agents and Nigerian travelling public are happy at his airline’s intervention on the London route and prays the airline develops others destinations.

“NANTA is proud of you not just as a local investor but your background as a travel agent before breaking forth into the airline business” Bankole said, adding that the association will help drive its commercial expectations and also “brand” it as national carrier.

Executive Director (Technical) for Med-View Airlines, Lookman Animashaun, said that the aircrafts were acquired as part of the airline’s route expansion programme.

Animashaun said that aside London and Jeddah operations, service to Dubai would soon commence after the conclusion of Hajj operations.