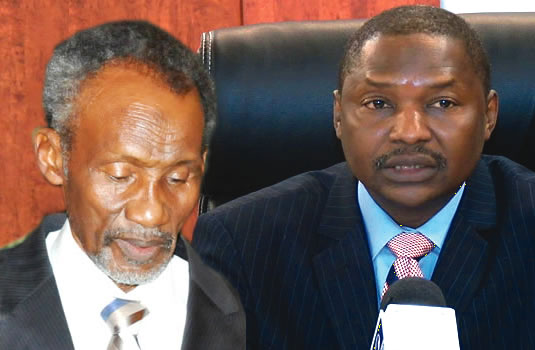 Judges under probe will be prosecuted, AGF tells NJC

Outgoing Chief Justice of Nigeria, Justice Mahmud Mohammed, said on Monday that the Attorney General of the Federation and Minister of Justice, Mr. Abubakar Malami, had informed the National Judicial Council that he was set to prosecute some judges who were being investigated for alleged corruption.

The CJN, who leaves office on attaining the retirement age of 70 on Thursday, said the communication received from the AGF informed the decision of the NJC to ask the affected judges not to perform judicial functions until the cases against them were concluded.

He spoke at the Supreme Court, Abuja during the swearing in ceremony of Justices Amina Augie and Ejembi Eko to the apex court bench.

He said the decision reached at the NJC meeting held between November 2 and 3, asking the affected judges not to sit again, was to preserve the independence of the judiciary and the confidence of the public in the system.

“…Justice is rooted in confidence and where confidence in our judges is undermined and independence eroded, it is the nation that ultimately suffers most while true democracy is fatally undermined.

“Certainly, the decision of the National Judicial Council at its last meeting reflects our desire to preserve this independence.

“Hence, we proclaimed to the world that any judicial officer that is standing trial will cease to perform judicial functions.

“The council took this stand following communications it received from the Hon. Attorney General of the Federation and Minister of Justice that he was embarking on the prosecution of the affected judicial officers for the offences disclosed against them from the evidence on the ground.”

The CJN, however, said that despite that, the judiciary remained resolute to upholding its independence and adjudicate with fairness and justice.

He said, “We must not forget that we operate a constitutional democracy which clearly prescribes the powers accorded to each organ of the state.

“I therefore wish to state without fear of contradiction that the third arm of government will remain resolute in its commitment and resolve to uphold its independence and to adjudicate with utmost fairness and justice prescribed in our constitution and the law.”

He thanked President Muhammadu Buhari for approving the recommendations of the new Justices of the apex court by the NJC promptly and also the Senate President, Dr. Bukola Saraki, as well as the Senate Committee on Judiciary, Human Rights and Legal Matters, for prompt confirmation of the candidates.

The CJN, who reminded the new Justices of the Supreme Court that they were joining the apex “at a time when there are a lot of challenges,” however expressed confidence that having “scaled constitutional and institutional requirements, you are no doubt ready to face these challenges head on.”

The CJN, who earlier administered the oaths of office and allegiance to the new Justices of the apex court, urged them “to be faithful to those oaths as they are testament of your fidelity to God, the law and the good people of Nigeria.”

The CJN added, “They are also public pronouncements of your honest commitment to the Almighty to continue to dispense justice without fear or favour, affection or ill-will.

“Now more than ever, it is important to be firm, honest and steadfast in the discharge of your duties, while striving to emulate the greats of this court by enthroning the rule of law and respect for our courts.”