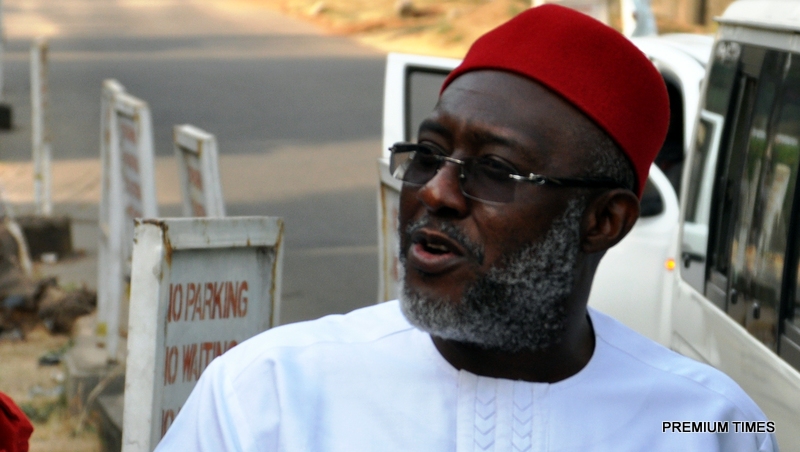 The Peoples Democratic Party, PDP, Lagos State chapter has appealed to the Chief Justice of Nigeria, CJN, Justice Mahmud Mohammed, to wade into the refusal to allow it’s embattled National spokesman, Chief Olisa Metuh to travel abroad for medical treatment.
The spokesman of the state chapter of the party, Gani Taofik on Sunday appealed to the CJN to allow Metuh enjoy his fundamental human right by traveling abroad for medicals in the spirit of democracy and freedom.

Metuh is currently facing a seven count charge of money laundering to the tune of N400m.
The Economic and financial Crimes Commission, EFCC, had accused Metuh of benefiting from the $2.1bn fund mean for the purchase of arms allegedly diverted by the office of the National Security Adviser to high profile individual.

According to the state chapter of the party, its national spokesman in view of his family ties to the country would not jump bail.

He said, “We ask the state not to take the ordinary prosecution to be a persecution as the whole efforts would be defeated if, God forbid, the defendant becomes permanently incapacitated due to lack of medical care for his peculiar ailments.

“Metuh has survived several attacks and we think that this prosecution should not turn into persecution. We are of the belief that it is not the wish of the judicial system that a defendant dies or is permanently incapacitated during trial in circumstances that are ordinarily avoidable. Olisa Metuh is a lawyer and is aware of the implication of jumping bail. He is not likely to jump bail. We appeal that justice should be tempered with mercy as this is very appropriate in this circumstance.
“For the Federal Government not to kill the opposition, this (May 29) celebration is an auspicious moment to allow Metuh enjoy medical care in any place of his choice. This is a strong appeal to the conscience of the trial judge, the prosecutor and, indeed, the Chief justice of Nigeria to have a second consideration for the full bail of Chief Metuh, who is obviously very ill and unable to continue the rigours of the trials.”