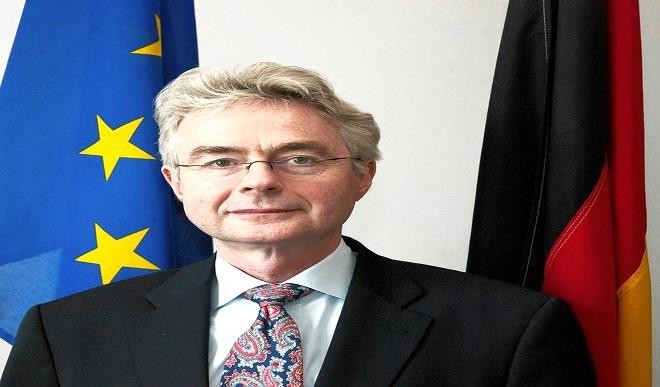 The German Ambassador to Nigeria, Amb. Michael Zenner, has said Germany-Nigeria Solar Power project at the University of Ibadan will commence this year. Zenner said this in an interview in Abuja on Thursday. He said the project, which cost 17,670 dollars (approx. N3.52 million), is expected to provide 10 megawatts of power supply to the university. The envoy said that the ground breaking ceremony would hold between June and July.

“ The solar project for the University of Ibadan is a solar project we have been planning together with Nigeria partners for some time. “It is part of the Nigeria-Germany energy partnership which has existed since 2008. “Within this whole field of energy partnership, and the German-Nigeria Binational Commission, the project of the University of Ibadan is a project which is very promising and I hope it will start this year.

“We plan, after all the conditions are fulfilled, the ground breaking ceremony next month or hopefully in July. “The idea is that the University of Ibadan will, by the end of the day, use only energy produced by solar power.” Zenner also explained that the university would gain several advantages from the solar project, adding that the project would be replicated in the Ahmadu Bello University, Zaria, Kaduna State.

“ This has several advantages, first it is a lighthouse project for solar energy in the framework of the cooperation between Germany and Nigeria in the energy and power sector. “Secondly, it helps the University of Ibadan save a lot of diesel; and thirdly, it is a training tool for students who study engineering. “ This (project) will cover the need of the University of Ibadan; we also plan this as well with the Ahmadu Bello University.

“The partner of this on the Nigerian side is the Ministry of Education; the financial means exists that it can be done in Ibadan as well as in Ahmadu Bello University.” He also said that several other energy projects between Germany and Nigeria were ongoing, adding that field studies were being conducted in some states to provide alternative sources of power. “We have within the framework of our power cooperation different other projects; there is one energy project which was agreed in the last meeting of the energy partnership in February.

“It is solar power project in Katsina, the Kankia solar project which is 125 megawatts. “In the northern part of Niger State, we have already set up a small demonstration of solar power plant. “The idea is that in rural areas which are not connected to the national power grid, solar power or hydropower or winds, if feasible, can generate the power these areas need. “By the end of the day, if one state produces surplus and they are connected to the national power grid, they can even contribute to and sell their surplus to the grid.”

He also said that the ongoing Azura Gas Power Project in Edo was also part of the German-Nigeria energy cooperation. He said that the energy projects both countries shared were important for the implementation of the COP21 decisions of Paris in order to reduce CO2 emissions. “I think, they generate about 459 megawatts in Azura in Edo State and that is a classical power plant fuelled by gas.

“But the CO2 emissions from the gas power plants are neutral as well to the climate and they are done by a German company and a Nigeria construction company and financed by Nigerian and international institutions.” Zenner also said that both countries cooperated in several areas under the German-Nigeria Binational Commission which was set up in 2012. 4 0 1 0