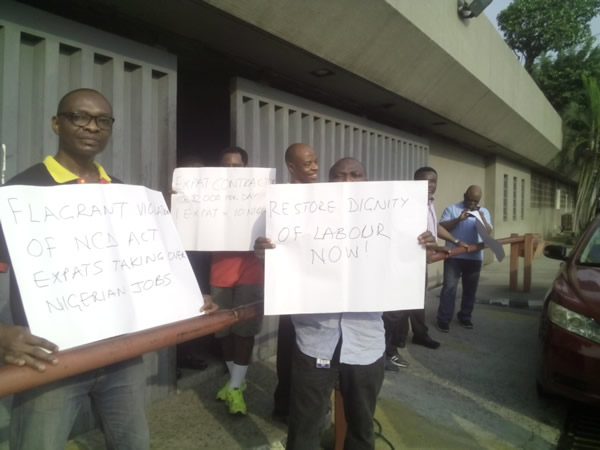 Workers shut down ExxonMobil over sacking

Members of Petroleum and Natural Gas Senior Staff Association of Nigeria shut down business operations at the ExxonMobil office in Lagos on Thursday over the alleged sacking of 145 workers by the company’s management.

During a protest, the workers, who are members of staff of Mobil Producing Nigeria Unlimited, an affiliate of ExxonMobil, also said they had shut down activities at the Qua Iboe Terminal of the company in Akwa Ibom State.

The ExxonMobil Branch Vice-Chairman of PENGASSAN, Mr. Gbenga Ekundayo, said that the company refused to complete negotiations with the union before embarking on the disengagement of the workers.

According to him, the oil and gas company informed the union that it was disengaging some of the workers because of low performance.

He said the union had argued that the system of performance appraisal was flawed and unfair, saying it had only provided instances that would warrant punishment and sacking of the workers without making provisions for their promotion.

Ekundayo stated, “We commenced discussion with them on November 29, 2016. The company said it had too many people and needed to let some people go. And we told them that we were aware that for years it had been short-staffed.

“We have had one person doing the job of three people. We asked them why they wanted to send people away; they told us that some people were low performers. We had talked about that six years ago that the system used for performance appraisal had a lot of faults.

“Early this year, the management instituted a new system to make it a bit transparent. We have not assessed the improvement on the system to see how transparent it is. We can only assess the appraisal system around March and April next year. We asked why couldn’t we wait and see the effect of what they had done to see if it is fair, transparent and good for the people.”

When contacted, the Manager, Media and Communications, ExxonMobil, Mr. Oge Udeagha, said that special benefits were in place for the affected workers in line with the existing labour agreements.

He said the company would continue to engage its workforce in order to resolve the situation.

Udeagha said, “We invest for the long-term and are focused on maintaining a stable and well-developed workforce, and are committed to treating our employees with respect and in accordance with applicable rules and regulations.

“This is a limited programme that will impact a relatively small fraction of employees. Special benefits specifically introduced for this purpose will be paid to affected employees, consistent with existing labour agreements. The company is also arranging special programmes to support the transition from the company for those affected.”