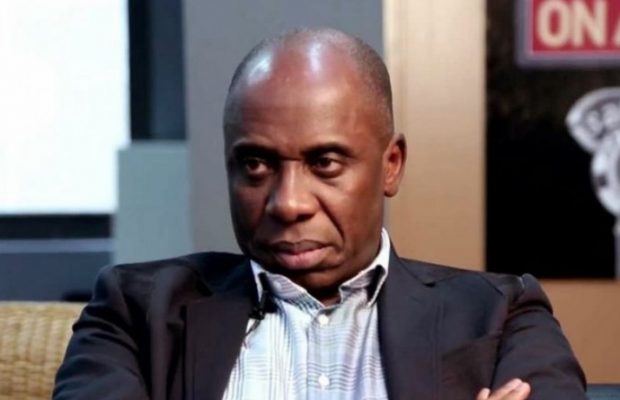 Rivers State chapter of the Peoples Democratic Party, PDP, has called on the Minister of Transportation, Mr Chibuike Amaechi to resign his position over allegations that he attempted to influence decisions of the court.

In a statement on Sunday, PDP Rivers Chairman, Mr Felix Obuah, called on the Minister to step aside to allow for thorough investigation of the allegations.

PDP also urged President Muhammadu Buhari to sack Amaechi from his cabinet.
“To further prove his innocence of the various allegations, Mr. Amaechi should resign, cooperate and allow the process of his investigation by not sabotaging any of such efforts in getting to the truth.

“The revelations have vindicated the PDP in Rivers State, as it has consistently complained about the corrupt and undemocratic dispositions of Amaechi and some of his APC folks.

“We demand thorough investigation into these stunning revelations by these honouable Justices of the Supreme Court and call on the accused (Amaechi) to resign immediately, as he lacks the moral rectitude to remain in office as a public servant.”
Responding, the All Progressive Congress, APC, in the state, dismissed the allegations by the Judges against Amaechi as laughable.
Media aide to the Chairman, Chief Eze Chukwuemeka, said “PDP’s suggestion that Amaechi should resign because two drowning Justices are looking for a tool to stay afloat is mischievous.

“They are so desperate to expose their evil plots against a man whom they see as the arrowhead that dislodged them from power at the centre.”

“These useless calls based on the unfounded and baseless attempted bribery allegations against the former Rivers State Governor confirms our fears and stand that the two discredited Justices made these allegations as part of a political strategy to run down the political fortunes of this rising star.

“PDP is only acting out its frustration over the key role that Amaechi played to end the corruption system engineered by the past PDP administration at the centre,” Rivers APC said.