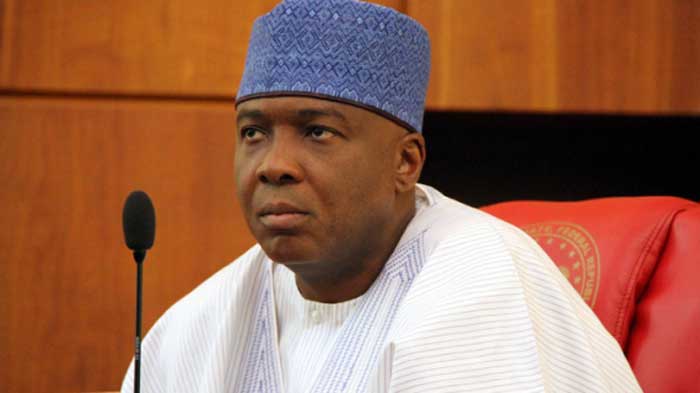 As the crisis of confidence between Senators Oluremi Tinubu (Lagos Central) and Dino Melaye (Kogi West) festers, the leadership of the All Progressives Congress (APC) and Senate President, Dr. Bukola Saraki, have begun moves to reconcile the feuding senators.

Melaye and Tinubu have been at loggerheads since July 12 when both of them engaged each other in verbal and counter-attacks during the Senate’s executive session.

While Melaye alleged that Tinubu addressed him as a dog and thug, the female senator on the other hand, alleged that Melaye threatened to rape and assault her.

THISDAY learnt yesterday that Saraki in his bid to reconcile the combatant senators met separately with them in his office last Tuesday imploring them to sheathe their swords in the spirit of reconciliation.

Tinubu was said to have spent over an hour in Saraki’s office in his bid to placate her to put the matter behind her and let the sleeping dog lie.

It was also learnt that Tinubu had hardly gone out of Saraki’s office when Melaye also walked in as the Senate President continued with his fence mending crusade.

But as this reconciliation move by the Senate leadership was ongoing, members of Lagos State House of Assembly shocked the National Assembly yesterday when they stormed the federal legislature to protest against the alleged attack of Melaye on the wife of their benefactor, Senator Bola Tinubu.

They were accompanied by some stalwarts of the APC from Lagos State including a former senator, Munirudeen Muse. The politicians had stormed Abuja in expression of their solidarity with Tinubu.

Speaking at the meeting, Muse condemned Melaye’s utterances and encouraged Tinubu not to be discouraged by the trend in her pursuit of “qualitative legislation for the development of the country.”

In her response, Tinubu vowed to sustain the tempo of criticisms of events and activities of the Senate which she considers to be unhealthy for the country.

In the same vein, a group of protesters led by former Commissioner for Women Affairs in Lagos State, Mrs. Kemi Nelson, stormed the gate of the National Assembly yesterday to protest against alleged harassment of Tinubu by Melaye.

Nelson had been alleged to have collected N75 million from Tinubu to lead the protest in solidarity with the senator, an allegation which she denied.

Speaking during the protest, Nelson who is also APC’s women leader in Lagos State, said enough is enough of harassing Tinubu, insisting that the Senate must take a disciplinary action against Melaye. “This is impunity and it has to be stopped, we must be accorded our right,” Nelson said.

Mrs. Tinubu had on Monday and Tuesday respectively petitioned the acting Inspector General of Police, (IG), Ibrahim Idris; Saraki and the National Chairman of APC, Chief John Odigie-Oyegun, alleging that her life was threatened by Melaye.

Before going to the National Assembly to register their anger over Melaye’s verbal attack on Tinubu, the members of the Lagos State House of Assembly had taken their protest to the leadership of the APC at the party’s national secretariat over the issue.

Addressing journalists shortly after they met with Oyegun, the Deputy Speaker of the Lagos State House of Assembly, Wasiu Sani, said they came to register their displeasure over the altercation between the two senators.
On whether the party would do anything about the matter, Sani said: “There were assurances from the national chairman and national leadership of the party that they would look into the matter and get it resolved.”

The Deputy Speaker said there was need to discourage such uncultured attacks on female legislators so as not to send the wrong signals that the hallowed chambers of the National Assembly is no longer safe for them.

The Lagos legislators accused the upper legislative chamber of conspiracy of silence, adding that such silence is not good enough.

“We are in Abuja to show our displeasure at the ugly incident that occurred at the National Assembly, between two senators of the APC, specifically, Mrs. Tinubu and Melaye. We are not unaware that there could be issues at the Senate, we could have divergent opinions.

“But when derogatory remarks, when F-words are used, when reprehensible, irrational, uncouth, unguided, unculture and irresponsible statements from a senator to fellow senator are used, it is not acceptable. We agree that there could be quarrel, there could be disagreement but there should be decorum.

“And we also felt, the leadership of the Senate did not act on time. Time is of the essence please, they allow the issue to fester, the recalcitrant attitude to fester is unbecoming of leadership. It should have been nipped in the bud.

“We are here to pay solidarity visit to Tinubu, as well as condemn the act, she should not be cowed, intimidated and she should not yield to verbal assault. The Deputy Speaker, Yinka, Hon. Desmond Elliot, and I are buoyant enough to sponsor ourselves and we all represent Lagos Central senatorial district where Tinubu is representing, is a course that we are convinced that we must fight.”

On the other hand, the Lagos legislators said the Senate is at liberty to also look at any acts of misconduct on the part of Senator Tinubu if there was any.

“But let me say that Mrs. Tinubu that we know, who incidentally was the First Lady of Lagos State between 1999 to 2007, some of us are like sons or brothers to her husband, Senator Bola Ahmed Tinubu. And in Yoruba land, if you are a son to a woman’s husband you are supposed to be her son. She respects us and always address us as sirs. So she is a woman that is cautious but she does not take nonsense, she does not take cheating.”