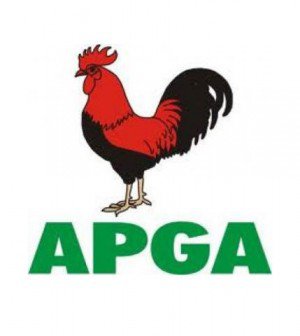 The National Chairman of the All Progressives Grand Alliance (APGA), Dr Victor Oye, has appealed to aggrieved members of the party to join him to move it forward.

Speaking when he visited a member of the party’s board of trustees, Chief Rommy Ezeonwuka, in Oba, near Onitsha on Thursday, Oye pleaded with the members to forgive and forget his shortcomings.

He said he never meant to slight anyone through his utterances and behaviour as he was a loyal leader who had come to serve.
He said that there was no need to throw the party into turmoil over issues that could be amicably resolved in line with its motto “Be Your Brothers’ Keeper”.

Oye said he had to make the apology in the interest of peace, pointing out that he never knew some people were aggrieved because nobody had told him.

“There is no need for us to quarrel, we need brotherly love to make progress. I have the humility to serve and I respect everybody.

“Some said I made disparaging comments, I never meant it. I was quoted out of context and these are the handiwork of mischief makers. There are other pleasant things that I said.
“But in all these, I urge all to forgive and forget each other so that we can have the party of our dream in the polity.
“Interestingly, all my friends who said they were offended have never told me, however, in life I see vanity and that is why I hold nothing with two hands,” he said.

Also speaking, a chieftain of the party, Chief Andy Umuoji, said there was need for its members to close ranks and ensure that Gov. Willie Obiano of Anambra was re-elected.

Umuoji said he was in support of any move to strengthen the party APGA and ensure its victory in the 2017 Anambra gubernatorial election.

In his response, Ezeonwuka said he had to organise the meeting so that the stakeholders could bare their minds.

Ezeonwuka, who is the spiritual leader of APGA, said “It is important that we know if the chairman was quoted out of context or he meant what he said. We are willing to reprimand him if we find him derailing but it is clear that it is all enemy at work in our party.

“As the spiritual leader of APGA, I want to investigate some of these things and find out the truth so that we can move forward.

Oye was quoted as saying that “egusi soup and spaghetti’’ were used to placate members of the national working committee to suspend him during a stakeholders meeting in Awka on Oct. 11. (NAN)