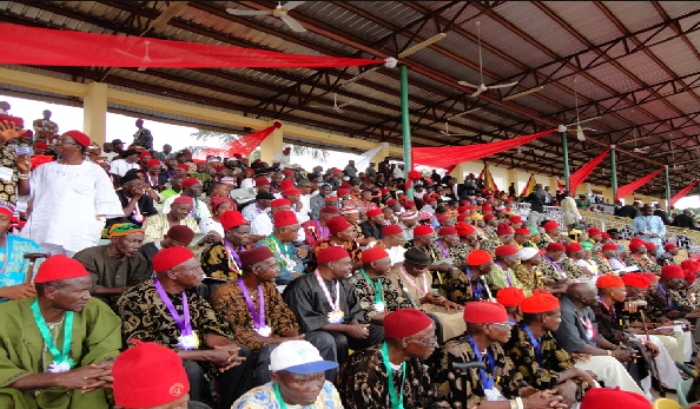 The Buhari South-East Youth Movement, BUSEYM, has warned politicians in the South-East geo-political zone of the danger of creating fathom political issues in the zone and blaming same on President Muhammadu Buhari, stressing that the current political configuration of the country which had placed South-East in the opposition was neither created nor caused by the President.

The group, in a statement jointly signed by its director-general, Engr. Nwabueze Onwuneme and national publicity secretary, Comrade Igwe Samuel Obinna and made available to newsmen in Owerri, was reacting to some statements credited to some speakers in an anniversary lecture held by Alaigbo Development Union in Enugu as reported by a national daily on May 28, 2016.

Stressing that it did not wish to join issues with some of the personalities who gathered recently in Enugu to make their assertions, BUSEYM urged the region’s political leaders who have not contributed to the socio-economic development of the zone to apologise for their ineffectual leadership rather than resort to the blame game and weaving of fiction.
While regretting the position of some Igbo elites who believe that the Buhari administration had relegated the Igbo to the background, it wondered how they arrived at this conclusion.

It accused the elites of failing to ask questions on the supposed developmental projects that should have accrued to the Igbo when the PDP was at the helm of affairs and totally neglected the zone as seen in the near collapse of infrastructure/socio-economic growth of the zone. It said these problems were not brought about by just one year in office of the APC led administration of President Muhammadu Buhari.

The statement reads, “Lest we forget in that era we had Igbo as Senate President, Secretary to the Government of the Federation, Minister of Finance and Co-ordinating minister of the Economy, Governor of the Central Bank of Nigeria to mention but a few.

“But in those 16 years it is regrettable to note that projects that were dear to the hearts of Igbos were not executed as seen in the Second Niger Bridge and Enugu-Onitsha which ditto till now was not done till the advent of the President Muhammadu Buhari administration which just of recent backed words with action by the release of N13billion and N5.5b respectively for the projects”
BUSEYM maintained that while they would not cross swords with any individual/group, their position is that those seeking relevance in the polity should come up with clearly stated programmes that would contribute to the upliftment and betterment of the wellbeing of the people. It advised against wiping up tribal/religious sentiments which has been the bane of the Nigerian nation and its people.

The group further maintained that Buhari had been very fair in his treatment of all tribes in the nation and Ndi Igbo inclusive as seen with the appointment of six Igbo sons as Ministers in the federal executive council.

The group advised that rather than trade blames or fan the embers of disunity, Igbo elites should re-strategise and re-align their political objectives and jettison platforms and personalities who had their turn, but failed to deliver.