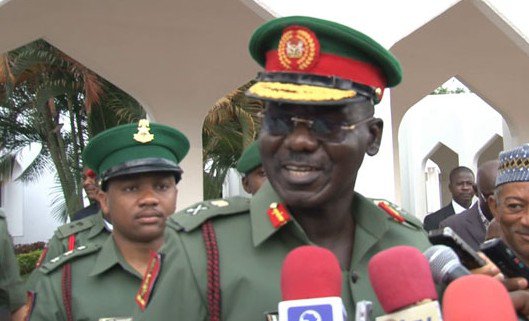 The Chief of Army Staff, Lt. Gen. TY Buratai has appealed to the nation’s online newspapers to support the Army’s relentless war against the Boko Haram insurgency.

Speaking at a one-day seminar on “Assessing the Threat of Boko Haram Insurgency in Nigeria” which held in Abuja on Monday, Buratai said the war against insurgency was to safeguard the sovereignty of the nation, hence there was need for support from the media, particularly the online media.

He said it was unfair to smear the name of the military and other security agencies while they have put their lives on the line in defence of the country.

” We need the support of everybody, especially, the online media. There is no point smearing and maligning the Army and other security agencies when they have put their lives on the line. They should be patriotic and take this Boko Haram issue as their own. If you ridicule the Army today, you are ridiculing the nation as the Army is a national symbol.”

Buratai equally said that some people in the society were collaborating with the insurgents, calling on all Nigerians to support the ongoing war in order to have the insurgents defeated. He said, ” on our own part, we will make sure that the remnant of the insurgents are cleared.”

by Online Editor — November 7, 2016 in Uncategorized