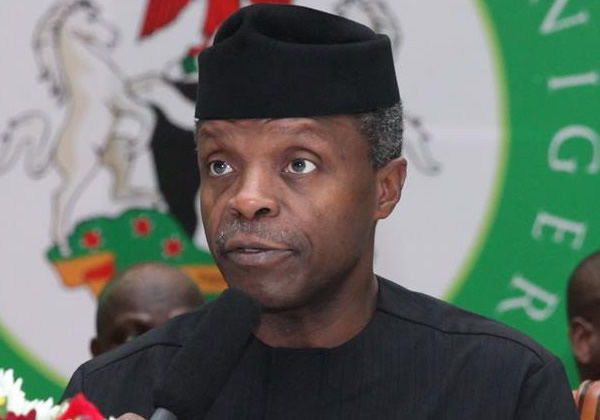 The Vice President Yemi Osinbajo will continue the global campaign against Boko Haram insurgency in a lecture he would deliver at the Harvard University, Boston, in the U.S. on Thursday.

A statement issued by the Vice President’s  spokesman, Mr. Laolu Akande, on Thursday, said the lecture at the Harvard’s “Nigeria in the World” seminar is at the invitation of the university.

It added that Prof. Osinbajo would be talking on “Destroying Boko Haram and the Rebuilding of Nigeria’s North-East”.

Akande said Osinbajo would highlight the progress made by the Buhari presidency in degrading Boko Haram resulting in the freedom of thousands of Nigerians in Boko Haram captivity, including some of the abducted Chibok girls.

He also said that Osinbajo’s lecture would be a clarion call for a more concerted global action against terrorism and an increasingly effective international collaboration regarding the humanitarian crisis in the North-East.

He said that the Harvard’s ‘Nigeria in the World’ seminar is hosted by the Weatherhead Centre for International Affairs.

Akande said the seminar served as a forum for scholars, researchers, policy makers, and professionals to reflect on critical issues pertaining to Nigeria’s relations with the world by focusing on strategic issues of security.

He said it also focused on regional stability, economic development, interreligious relations, health policy, human rights, justice and gender, while its overall goal is to bring Nigeria into dialogue with world issues.

While in Harvard, the VP would be received by top officials of the university and would also visit the Divinity School and the African Studies Centre, the statement said.

It added that Osinbajo would participate on Friday in a town hall event in Houston, Texas, and also a business conference organised by U.S.-based Nigerians on Infrastructure development issues.

It said the VP would round off the visit in Houston by attending an evening gala to honor high flying U.S.-based Nigerians.

The Vice President who left Abuja on Wednesday after attending the Federal Executive Council meeting and the inauguration of the Presidential Committee on the Northeast Initiative, is expected back on Sunday.