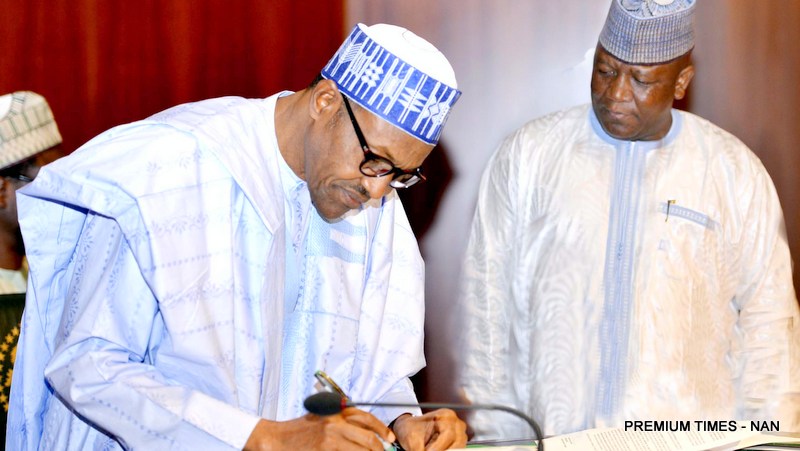 President Muhammadu Buhari has signed the the 2016 appropriation Act into law.

Mr. Buhari signed the budget in the presence of the Senate President, Bukola Saraki, and the Speaker of the House of Representatives, Yakubu Dogara, in his office at the presidential villa Abuja.

Others who witnessed the budget signing ceremony were the national chairman of the governing All Progressives Congress, APC, John Odigie-Oyegun and the Secretary to the Government of the Federation, Babachir Lawal.

The 2016 budget estimates suffered several delays after claims and counter claims from both the legislature and executive arms, each accusing the other of padding the budget.

Mr. Buhari returned the budget to the National Assembly, saying key projects were removed and others not in the estimates he submitted were added.

A meeting was held last week with the leadership of the national assembly after which a committee was formed to look at all “grey areas” and harmoniss them in time for the president’s assent.

The National Assembly reportedly returned a “clean” copy of the budget to the president which he finally signed today.

Details of the final copy of the budget is unknown at this time.