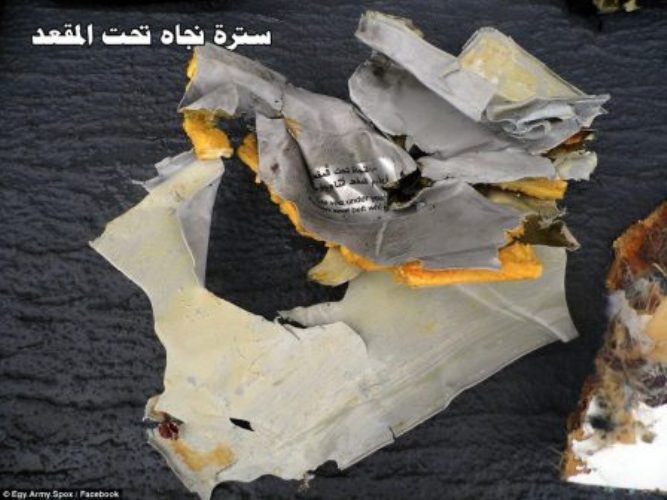 The first pictures of the mangled wreckage from EgyptAir flight 804 have emerged as investigators confirmed smoke was detected in multiple places moments before the plane plummeted into the Mediterranean.

Daily Mail of London reports that the plane’s twisted blue metal panelling, marked with EgyptAir branding, as well as items of clothing and yellow lift jackets have been recovered from the sea, where investigators continue to search the wreckage.

Egyptian media have also reported that divers have found the blackbox between close to the crash site. The blackbox could provide vital clues into what caused the plane to crash just as it entered Egyptian airspace on its journey to Cairo.

The cause of the crash that killed all 66 on board remains unclear but smoke alarms were sounding for almost three minutes before it began its rapid descent, according to the Aircraft Communications Addressing and Reporting System (ACARS) data.

Agency spokesman Sebastien Barthe confirmed the new findings ”generally mean the start of a fire,” but insisted that everything is currently ”pure conjecture.”

The new information suggests that a fire on board the EgyptAir plane is a more likely reason for the crash than a bomb, although experts have not ruled out the use of an ‘incendiary device’.

While Egyptian officials continue saying that they suspect terrorism, no group has yet come forward to claim credit as theories as to the cause of the crash continue to circulate.

It comes as hundreds of mourners gathered to offer prayers for the 66 passengers and crew killed in the EgyptAir disaster.