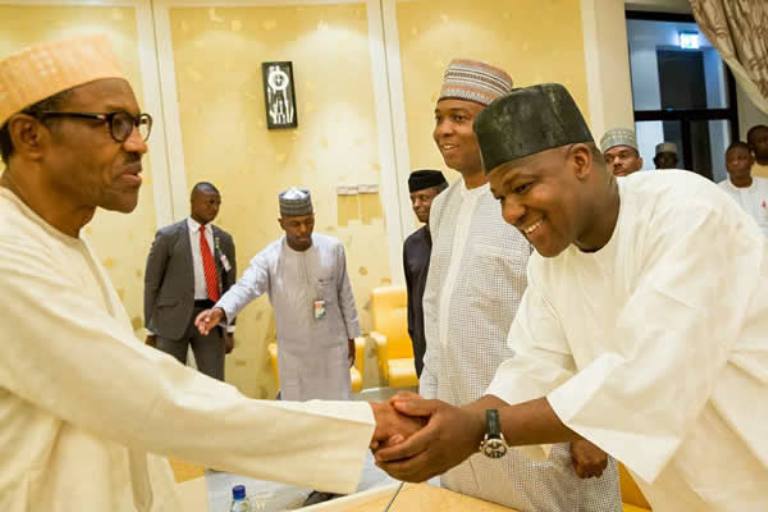 President Muhammadu Buhari and the leadership of the National Assembly have resolved to harmonise the ‘grey areas’ in the 2016 budget, The PUNCH learnt on Wednesday.

Two separate technical committees have been set up by the President and the National Assembly officials to study the areas of dispute and come up with a harmonised position in a bid to quicken the signing of the N6.06tn budget.

One of the committees will be working on the side of the executive, while the second committee will serve the interest of members of the National Assembly.

The leaders had met with Buhari at the Presidential Villa on Tuesday night where the decision was taken.

In attendance were the Speaker of the House of Representatives, Mr. Yakubu Dogara, and principal officers of the Senate.

The Deputy Speaker, Mr. Suleiman Lasun, was also in attendance.

Investigations showed that Lasun would chair the National Assembly committee.

It was not clear on Wednesday who chaired the committee on the side of the executive, though The PUNCHlearnt that Vice-President Yemi Osinbajo; Minister of Finance, Mrs. Kemi Adeosun; and the Minister of Budget and National Planning, Mr. Victor Udoma-Egba, were members.

“Buhari met with the leaders for about 30 minutes last night (Tuesday).

“The two committees were raised to look into the budget and produce a harmonised position,” one senior National Assembly official told The PUNCH on Wednesday.

Dogara, on resumption of the plenary on Wednesday, immediately called for a closed door session with members.

At the session, which lasted for about 45 minutes, the Speaker briefed members on the outcome of the meeting with Buhari.

“It was important to brief members so that they are not left in the dark. When they don’t have information, they may begin to speculate or even conclude that there is something hidden.

“So, it was necessary to brief them,” another source informed The PUNCH.

Findings indicated that, going by the mood at the Villa meeting, Buhari might append his signature to the budget by Tuesday next week.

When contacted, the Chairman, House Committee on Media and Public Affairs, Mr. Abdulrazak Namdas, confirmed that Buhari and the leaders indeed met.

He also confirmed that the closed door meeting Dogara called centred on the budget.

He added, “The Speaker adequately briefed members on the outcome of the meeting. We are hoping that everything will work out fine and the budget will be signed by Mr. President soon.”

The PUNCH gathered that the ‘grey areas’ were “distortions” in the budget, particularly the alleged introduction of projects by the National Assembly, which were not in the President’s original version.

The Presidency is also said not to be comfortable with the movement of funds from certain vote heads to others, which might make the execution of such projects impossible.

The contentious Calabar-Lagos rail line project was also listed as one of the grey areas, with the Presidency still requests that it should be included in the budget.