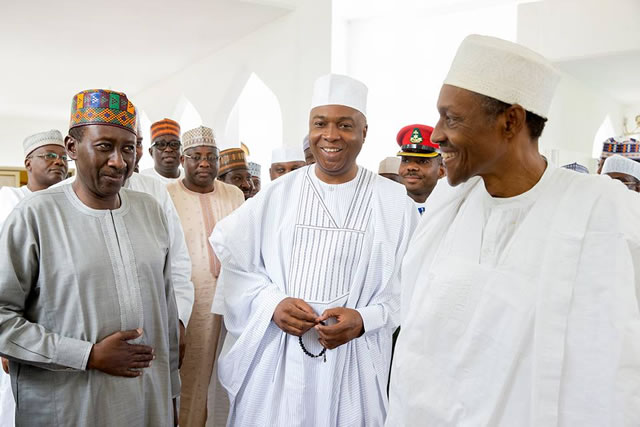 President Muhammadu Buhari on Friday met behind closed doors with the President of the Senate, Dr. Bukola Saraki.

Buhari met with the two senators separately in his office shortly after they joined him for Jumat prayers at the mosque inside the Presidential Villa, Abuja.

Saraki was accompanied to the President’s office by Senator Danjuma Goje.

The Chief Justice of Nigeria, Justice Mahmud Muhammed, also attended the Friday prayers but left immediately after the prayers ended.

Saraki later told State House correspondents that Buhari’s external borrowing request that was rejected by the Senate was a work in progress.

While warning against the reading of politics into the issue, he also said the development should not be viewed as a reflection of the relationship between the Executive and the Legislature.

Saraki said,”I came here to pray. I have finished praying and I just had a general felicitation with the President. It did not go beyond that.

“We should not look at the loan request as a reflection of the relationship between the Executive and the Legislature. Don’t let us politicise very important issues. As we said, this is work in progress.”

The Leader of the Senate, Ali Ndume, had, on Tuesday, said Buhari’s request for $29.9bn foreign loan was rejected due to technical issues.

“I am going to appeal to my colleagues to take a look at it again and see how we are going to bring it back.

“One of the technical things that were missing is that in the letter, if you read it, says: ‘attached is a draft’ but there was no attachment.

“So, these are some of the lapses that we will look at in bringing it back.

“We were thinking that there was going to be details but there was no detail of the borrowing plan. I believe that those will be included in the next one.”