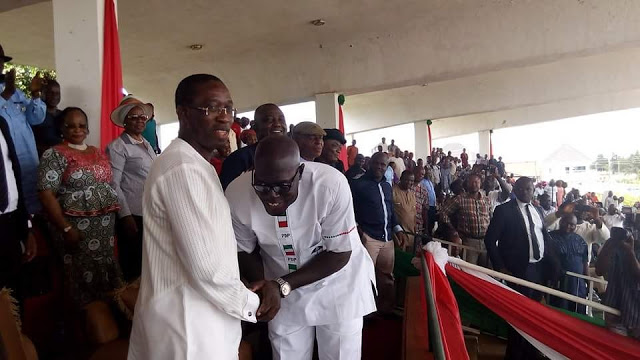 Buhari pulling Nigeria back to the Military Era – PDP

The Delta State People’s Democratic Party (PDP) Chairman, Hon. Kings­ley Esiso has accused the rul­ing party in the country of taking the people back to the ‘military era’ where the rule of law is jettisoned.

Esiso made this accusation in Warri yesterday during his visit to the Warri South Local council Area in continuation of his familiarization tour of all the 25 local council areas in the state.

“Today the country is being governed as if there is no law. We have been gradually taken back to the military era even though we are in democracy. Tell them that PDP is a demo­cratic party. And because we are very democratic in nature, we will meet them in 2019,” he said.

The Delta PDP chairman noted that the change prom­ised by the present govern­ment has brought untold hardship to the people, calling on Nigerians to kick them out in 2019 if they want to get out of the pains inflicted on them by the APC government.

He said, “Come 2019 we are going to remove them demo­cratically through the bal­lot box. We will change their negative change to a positive change. I want to assure you that PDP has the capacity and the strength to crush all other parties.”

Esiso said the party has the capacity to kick the ruling party out of power in the next election, vowing that the PDP would do all within its pow­er to make sure that it takes back the number one posi­tion in the country.

He stressed that PDP was going to take back the reins of power from the ruling party come 2019 and called for the support of all PDP faithful to make this dream come true.

While thanking the people of Warri South for their un­flinching support for PDP in the past 17 years, Esiso prom­ised them that the state gov­ernment was going to beam its searchlight on the council area and will rehabilitate all the bad roads in the council area in the next dry season.

Esiso called for all members of the PDP to be united and live as one, adding that with­out peace and unity, the party will not move forward.

He also urged them to sup­port the administration of Governor Ifeanyi Okowa so that he can spread the divi­dends of democracy to all the nook and cranny of the state. He said the governor is com­mitted to ensuring that his prosperity for all agenda reach­es all Deltans.

On his part, the Senior Special Assistant on Health Matters to Governor Ifeanyi Okowa, Dr. Joseph Otumara said that PDP is going to rule the state forever noting that the PDP had no rival in the state.

Earlier, the host, Warri South PDP chairman, Mr. Johnson Agbeyegbe pledged the sup­port of members of the party to the government of the state, adding that the council area, being one of the economic hub of the state, was ready to part­ner with Governor Okowa to move the state forward.

Egbeyegbe appealed to the State PDP chairman to use his office to bring the needed de­velopment to the council area.