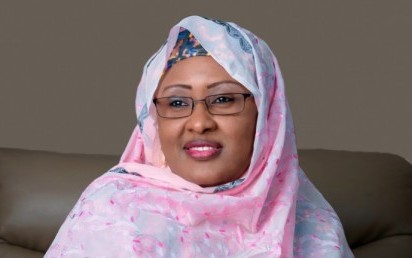 Buhari’s government has been hijacked by cabal – Aisha Buhari

The President’s wife, Mrs. Aisha Buhari has warned that her support for her husband for 2019 election rest on the her husband’s readiness to shakeup his government. The soft spoken Aisha Buhari in a BBC Hausa interview monitored in Kano said that Buhari’s government has been hijacked by cabal who are “behind presidential appointments”. Mrs Buhari revealed that “he is yet to tell me, but I have decided as his wife, that if things continue like this up to 2019, I will not go out and campaign again and ask any woman to vote like I did before. I will never do it again “. Aisha Buhari Aisha Buhari Aisha Buhari who spoke against the backdrop of growing discontent over Buhari’s popular declaration that he belongs to everybody and belong to one emphasised that “I may not back him at the next election unless he shakes up his government’. She lamented that most of the officials of the government are known to the President and the first family, adding that they are usurpers who did nothing to help All Progressive Congress struggle in 2015. Asked to name those who had hijacked the government, she smiled and declared that “you will know them if you watch television.” Mrs Aisha Buhari posited “the President does not know 45 out of 50, for example, of the people he appointed and I don’t know them either despite being his wife for 27 years.” She further revealed “some people are sitting down at their homes folding their arms only for them to be called to come and head an agency or ministerial position”. Mrs Buhari claimed that “some of them don’t even have voters card, and those who made sacrifice have been reduced to nothing and certainly not happy with the way things are going ’. Vanguard learnt that the full text of the interview would be aired on Saturday morning on BBC Hausa magazine programme “Gane mun Hanya”.