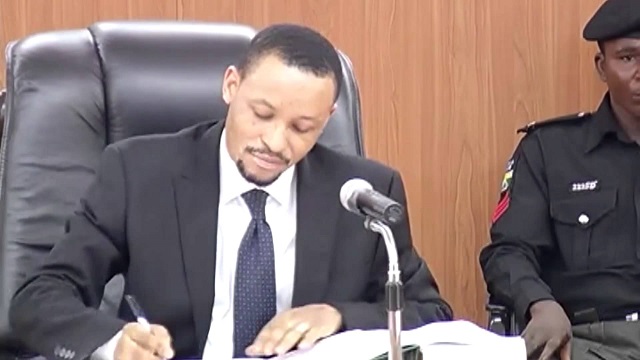 CCT Chairman, Umar explains how he was cleared of bribery by Attorney-General

The Chairman of the Code of Conduct Tribunal, CCT, Justice Danladi Umar, has explained that contrary to the claim by the Senate President, Dr. Bukola Saraki, the Attorney-General of the Federation and Minister of Justice, Mr. Abubakar Malami, SAN, had cleared him of the allegation of bribery leveled against him.

The judge stated this yesterday while arguing a motion brought by the Senate President’s lawyer, Mr. Ajibola Oluyede, asking him to disqualify himself from further presiding over the trial on the grounds that there would be a likelihood of bias in Umar’s handling of the case because he remained under investigation by the EFCC for bribery.

Oluyede said the tribunal chairman would be subject to the control of the Economic and Financial Crimes Commission, EFCC, since the anti-graft agency was the body that allegedly brought Saraki before Umar for trial, but Umar responded by disclosing that he had been cleared of the allegation by both the EFCC and the AGF.

According to Umar, “A group called Anti-Corruption Network wrote a petition against me at the House of Representatives. The House committee invited me and I went there three times but the petitioner did not come. I told the committee that what I think should be done and I said if it were to be court, when the person who filed a case refused to come, the court will strike it out. But the chairman said, let’s give them another time.

Why did he not strike it out and decided to continue to wait for the petitioner?

“I went there just because of the respect I have for the institution. I am a law abiding citizen, that is why I went there three times abandoning all my works here.