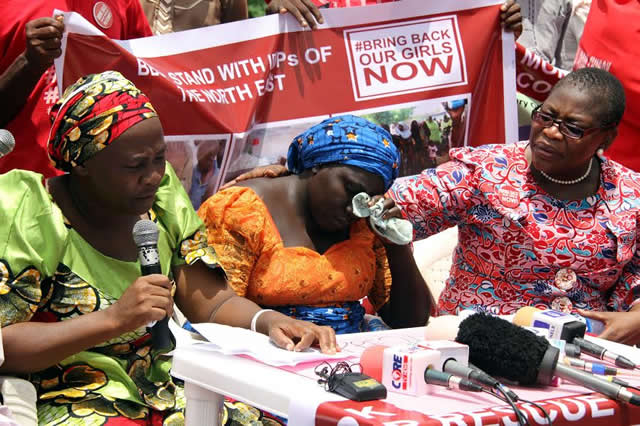 Some parents of the over 200 girls abducted from their school in Chibok, Borno State, in 2014 are currently reaching out to the Presidency for a meeting with President Muhammadu Buhari that will not have anything to do with the BringBackOurGirls campaigners.

This is coming at a time when security operatives prevented the BBOG campaigners from gaining entrance to the Presidential Villa, Abuja, on Monday and Thursday for a meeting with Buhari.

A top Presidency source, who spoke on the condition of anonymity, told Punch correspondent that while the campaigners had been parading only two parents of the girls, the women leader of the Chibok parents, Yana Galang, had expressed their desire to meet with the President.

He said the woman told the Presidency that the parents would wait for the first child of late Head of State, Gen. Murtala Mohammed (retd.) and Chairman/Executive Officer of Murtala Mohammed Foundation, Mrs. Aisha Muhammed-Oyebode, to return to the country in September to facilitate the meeting.

The source said, “The Chibok parents’ women leader called and reiterated their commitment to work with the government.

“She said that they are looking forward to a meeting with the President or with government officials, which has nothing to do with the BBOG campaign.

“She said they will wait until Mrs. Muhammed-Oyebode returns to the country at the beginning of next month, so she can facilitate this.”

He added that while the campaigners have been parading the two Chibok families based in Abuja and another based in Minna, Niger State, none of those based in Chibok has attended their rallies.

He said Galang also reported that one of the parents who have been attending the rallies, Esther Yakubu, called and scolded her about recent media comments credited to her.

Galang had in the report said, “We (Chibok parents) do not want to do anything that the government will not be happy about. We are not after any organisation that is against any party or religion, and we are supporting the Federal Government to help us release our girls.”

He said they wanted her to publish a retraction which she said she would not do.

Another source had earlier told our correspondent that Buhari refused to meet with BBOG campaigners because of Dr. Oby Ezekwesili’s alleged rudeness to him when he met them on January 14.

He said with what happened at that meeting, nobody could stick out his or her neck again to convince the President to meet with them.

He said, “You will recall that at the last meeting, the President sent a minister and some aides to meet with them at the old Banquet Hall.

“Surprisingly, the former minister (Ezekwesili) was rude to President Buhari during the meeting that was held behind closed doors by telling him that she was not satisfied with him.”

But the BBOG spokesman, Abubakar Abudullahi, said the coalition has no control over the parents of the kidnapped schoolgirls, noting that they were free to see the president without the group.

“We don’t have control over the Chibok parents and they are free to see the president or whoever they wanted to see; we are all working for the same goal. That is all I have to say about it,” he said in a phone conversation on Friday.

It will be recalled that the Senior Special Assistant to the President on Media and Publicity, Garba Shehu, had said on Thursday that the Federal Government has not given up on the abducted girls.

He said Buhari’s heart was with the girls and their parents and that efforts to find them would continue.

The presidential spokesman said, “The President’s heart is with the Chibok Girls and their parents. He understands their feelings. The government has not given up on the missing girls. Efforts to find them will continue.

“So far, the country’s gallant and the re-energised military have taken back more than 20,000 citizens held hostage by the terrorists.”