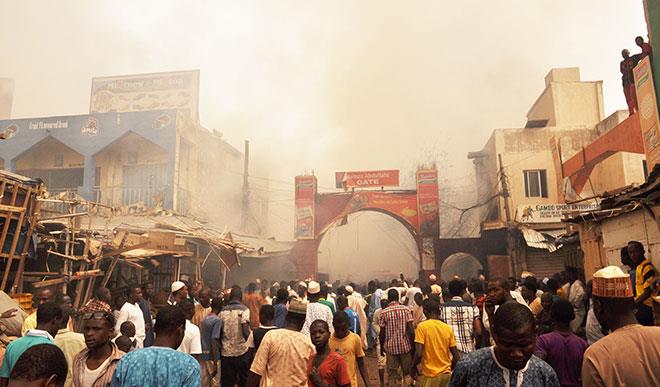 No fewer than 24 residential houses and several market stalls in Dawaki, Kanke Local Government Area of Plateau State were burnt in a communal clash that erupted Tuesday evening.

The clash was between the Ngas people living in two separate communities of Kudum and Dawaki, who share a very difficult border.

DAILYPOST gathered that though no life was lost in the clash, several persons were injured, with two persons on admission at Pankshin General Hospital.

Reliable sources, who spoke on anonymity, said that trouble stated when the people of Kudum community were prevented from celebrating their `End of Year Harvest Festival’ by youths of Dawaki community.

“There is a hill around the border of the two communities, which had been the usual spot where the Kudum people conduct their ritual for the harvest festival.

“But this time around, the youths of Dawaki came around the hill and removed all the ritual materials on the basis that the place belongs to them and ritual should not be carried out there, ’’ the source narrated.

The sources said that the youths went wild and began to burn houses belonging to citizens of Kudum, and also set part of the Dawaki market ablaze.

“As we talk now, more than 24 houses and several market stalls have been burnt; if not for the soldiers that were drafted to the scene, the damage would have been more,’’ he said.

When contacted, Media Officer of Operation Safe Haven, (OPSH) saddled with responsibility of maintaining peace in Plateau State, Captain Ikedichi Iweha, confirmed the incident, and said the situation had been brought under control by his team deployed to keep vigil in the troubled area.

“The good news is that no life was lost in the communal clash, which left several residential houses and market stalls burnt; the exact figure of the casualties is what we are yet to ascertain,’’ Iweha said.

The Council’s Management Committee Chairman, Mr Yohanna Titus, told DAILY POST that a stakeholders’ meeting would be held to find a lasting solution to the crisis between the two warring communities.

Titus said, “We are not happy about this situation which took place between brothers simply because of a mere mis-understanding.

“Our joy and happiness is that no life was lost; the colossal loss of property that occurred as a result of the conflict is our concern now,’’ he said.

Titus appealed to the Federal and the State Governments to come to the aid of the victims, some of whom he said had no place to stay as their houses were completely burnt during the crisis.

Also affected was the house of a former chairman of the council, Mr Jurbe Gonzuk.