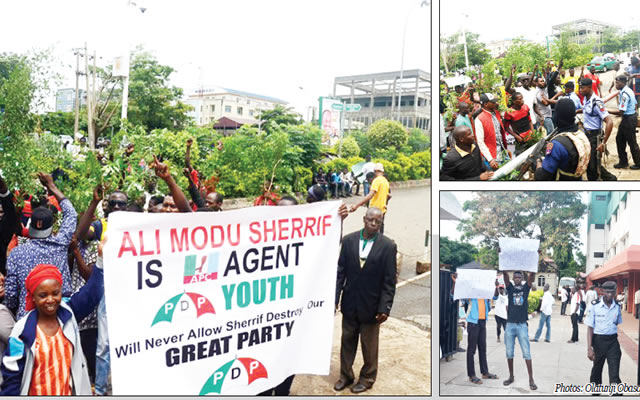 There was more drama at the Peoples Democratic Party’s national secretariat on Wednesday as two factions of the party continued their struggle for the control of the national office.

As early as 7.34am, the pro-Ahmed Makarfi supporters arrived at the party’s national headquarters to protest the takeover of the secretariat by Senator Ali Modu Sheriff and some members of the dissolved National Working Committee of the party, who were reportedly sacked as national officers at the PDP national convention in Port Harcourt on May 21.

The governors and other stakeholders had converged on Port Harcourt for the party’s national convention, where a caretaker committee, headed by Makarfi, a former governor of Kaduna State, was constituted.

But the Sheriff faction described the caretaker committee as illegal, saying it had no place in the PDP constitution.

When Makarfi supporters got to the national secretariat of the former ruling party on Wednesday, they stormed the offices of the former National Secretary of the PDP, Prof Olawale Oladipo, and the ex-National Auditor, Alhaji Adewole Adeyanju, and chased them out of the building.

The two party chiefs escaped what would have been a mob attack as they were spirited out by PDP internal security officials.

Oladipo, who was the first to be smuggled out was, however, accosted by some of the supporters, who queried his mission at the secretariat. He was heard asking to be allowed to leave.

The former party secretary was, thereafter, driven out through the gate of the neighbouring Sky Memorial Complex to avoid unpleasant encounter with the irate crowd.

While Oladipo was able to leave in his Toyota Sports Utility Vehicle, Adeyanju opted to leave his blue Toyota Camry, with number plate APP 767 CK, behind and made it out of the building on foot.

After chasing the ex-party officers out of the building, the protesters locked up the main gate of the secretariat and handed over the keys to the Chairman of the party’s BoT, Senator Walid Jibrin, who arrived at the scene moments later.

The crowd, which earlier surrounded his car and prevented him from  driving into the premises, handed him the keys after ascertaining his identity.

There was, however, more confusion later in the evening when party members, who were believed to be sympathetic to Sheriff, broke into the secretariat and occupied it after Makarfi’s supporters had left.

Earlier in the day, the two opposing groups of protesters besieged the national secretariat to press home their demands for a resolution of the ongoing crisis rocking the party.

The anti-Sheriff protesters, carrying placards with inscriptions such as ‘Sheriff must go’, ‘Sheriff, leave our party alone’, and ‘Agent of APC, stop killing our party’, were the first to arrive at the secretariat in several mini buses at about 7.32 am.

The protesters, under the aegis of PDP National Rebirth Group, who were mostly youths, shouted anti-Sheriff songs, demanding that the ousted chairman should give up his hold on the party secretariat.

The leader of the group, Mr. Edede Franklyne, in an interview with journalists, declared that the Makarfi-led Caretaker Committee was set up to rescue the party, advising Sheriff to shelve his ambition in the interest of the party.

The protesters took a short break at about 10am during which time, the pro-Sheriff protesters came in their numbers, singing and dancing while insisting that Sheriff remained the party’s national chairman.

Some of the protesters, who wore vests embossed with Sheriff’s portrait, while dancing, displayed placards with such inscriptions as ‘Sheriff MUST stay’ and ‘Sheriff is our man’ while dancing to traditional Hausa music.

A handful of policemen and officers of the Nigerian Security and Civil Defence Corps watched from the sidelines throughout the period of the protest.

Plain-clothes security officials were sighted appealing to leaders of the two groups to avoid a confrontation.

When contacted, his media aide, Mr. Inuwa Bwala, said his boss went to Maiduguri to attend a funeral.

The leader of the pro-Sheriff protesters, under the aegis of Guardian of Democracy, Mr. Solomon Azobie, in an interview with journalists, maintained that Sheriff remained the national chairman of the PDP until otherwise decided by a court.

The protests ended peacefully at about 4.35pm when the last set of protesters entered  their vehicles and left.

But a new dimension was added to the drama at 5.15pm when the pro-Sheriff demonstrators, who had earlier left the secretariat, returned to the national secretariat in greater number.

The protesters chanted ‘Sheriff will enter his office now’; ‘Sheriff is national chairman of the PDP’; ‘No to Makarfi’.

The Publicity Secretary of the PDP Caretaker Committee, Mr. Dayo Adeyeye, told our correspondent that the committee knew nothing about the protests in the morning at the secretariat.

He said, “I heard about it from journalists like you.”

In response to a question about the forceful entry into the secretariat by the pro-Sheriff protesters, Adeyeye stated, “I will get in touch with the relevant authorities.”

The Sheriff camp equally distanced itself from the protests.

Sheriff’s media adviser, Inuwa Bwala, said in a telephone interview, “Senator Ali Sheriff is not even in town; he travelled to Maiduguri to attend a funeral.

“We heard about the protests at the secretariat and we will report to the appropriate authorities.

“There are people who are bent on fomenting trouble but we will continue to follow the path of the rule of law like we have always done.”

Protest, an act of brigandage –Sheriff

Meanwhile, the embattled Sheriff condemned the invasion of the party secretariat, describing it as shameful and an act of hooliganism and brigandage.

In a statement by Bwala, the ex-Borno State governor described the takeover of the office by some protesters as an act of desperation employed by the “illegal caretaker committee” led by Makarfi.

The statement added, “He (Sheriff) views the sacking of the secretariat of the party today by hoodlums under the directive of the so-called Caretaker Committee as a sad reminder of the days of lawlessness, impunity and brigandage for which sponsors of the caretaker committee have been known over the years.”

In a separate statement, the party’s former National Secretary, Oladipo, denied being chased out of the party secretariat.

He said, “I left office when I was through with all I needed to do, same with the National Auditor, who came to my office before he took his leave.

“I wish to advise all PDP members to discountenance the fake news peddled by the enemies of our party; surely, we shall soon get over the internal schism in our party.”

Attempts to get a reaction from the Chairman of the Board of Trustees, Jibrin, were futile.

Calls to his mobile were not returned while a response to a text message to his telephone on the subject was still being awaited as of the time of filing this report.