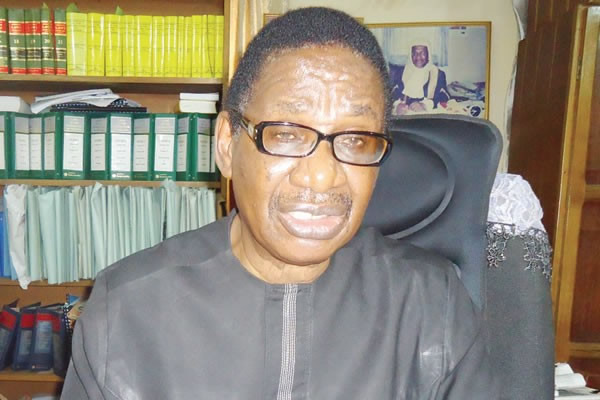 The Chairman, Presidential Advisory Committee Against Corruption, Prof. Itse Sagay (SAN), on Monday, justified the recent arrest of judges on allegations of corruption, categorising acts of corruption by judicial officers as a crime against humanity.

Executive Secretary of PACAC, Prof. Bolaji Owasanoye, also on his part, called for the suspension of the judges arrested by the Department of State Services on allegations of corruption pending when they would clear their names.

Sagay and Owasanoye spoke during PACAC’s interaction with reporters on the first anniversary of the committee’s activities.

Responding to various criticisms from some quarters against the raids on the houses and the arrest of seven judges between October 8 and 9, Sagay said the critics failed to understand the implications of corruption on the bench.

He said an ordinary man could be guilty of corruption, but a judge should never be.

“Once a judge does that, he brings himself to our level and so, cannot complain if he is treated like you and me are treated. That is what has happened. Let us be objective and be fair to this country in our commentary and not be narrow minded.”

Sagay explained that because of its tendency to inflame, resorting to self-help and ultimately breakdown of law and order, judiciary corruption could be described as crime against humanity.

He said, “Those who have criticised the DSS have not looked at the implications of judicial corruption. This is because at the end of the day, when there is corruption, who do they take the matter to, to the judge? The judge is the ultimate and if the buck stops at his table and that judge is complicit in corruption, then, that is the end of the fight against corruption. That is how awful it is.

“So, any judge, who is corrupt, is committing what I can even call a crime against humanity because it just destroys our confidence and the system, which will sustain the state in law and order.

“It encourages people to resort to self-help because there is no hope in taking the crime to court.

“Today, we have some governors who are sitting there who we know did not win election. And because they killed on their way to office, people are still dying to sustain them in office.

“Yet, some courts at the highest level gave approval to the process that brought those people to what I call their bloody seats on which they are sitting.

“If the judiciary is corrupt, if the only body, in fact, the only arm of government that has the power of life and death over Nigerians, is corrupt, then it is sad.”

He said people should be sad by the mere fact that “billions of naira” that were supposed to be meant for the construction of roads, building and equipping schools and hospitals were found in private residences.

“Isn’t it enough that billions of naira are found in private residences? Don’t we associate these billions of naira with the fact that our roads are in state of disrepair; that our hospitals are under or ill-equipped; that schools are dilapidated; and that it affects your daily life? What of those whose salaries are not paid in the public service? All this money came from the public purse.

He blamed the arrest of the judges on what he described as loss of moral authorities on the part of current Supreme Court Justices.

He said in the era of Justices of the “golden Supreme Court” such as the late Justice Kayode Eso, no government agency would dare to arrest them even when they delivered a lot of judgments against the then military administrations, including that of the Head of State, Maj. Gen. Buhari (now President).

He said, “We need the judiciary; but we need an upright judiciary. Without that, all arms of government will collapse, democracy will collapse.

“You will remember the era of Eso, Oputa, Nnamani, Idigbe, Mohammed Bello, Obaseki. Which DSS would have dared to question any of those persons? Nobody, no agency of government would have dared it.

While also, justifying the arrest of the judges, Owasanoye said four of the judges, who are on active service, should have been suspended pending when they would clear their names.

On whether the PACAC had met with the National Judicial Council on the need to suspend the arrested judges, Owasanoye said it was no longer necessary in view of the statement issued by the NJC, faulting the arrests carried out by the DSS.

He said, “The NJC has responded to the DSS action.

“The proper thing is for the judges to be suspended. This is my personal opinion and not the opinion of PACAC. If a judge is going to be appearing before a judge on criminal charges, is it appropriate for him to sit over cases?

“The proper thing is for the judges to be given that chance to defend themselves. If they are exonerated, they can go back.

“NJC has been investigating some judges and technically suspending them by not assigning cases to them.”

The PACAC executive secretary defended the action of the DSS, saying it was lawful.

Owasanoye however argued that the judges were not covered by immunity from arrest, adding that the search warrants, with which the judges’ homes were raided, could be executed anytime.

He said, “There is nowhere that they say judges cannot be arrested. DSS has the power to arrest. The National Security Act empowers the agency. You can arrest without a warrant

“The law allows you to use reasonable force if the owner of the house resists. In this instance, they have followed the law.”

He added that the PACAC had intervened in resuscitating some dying high-profile corruption scams such as the Halliburton and Malabu scandals.

“Malabu, Halliburton, and other cases are not going to die. We have given advisory and they will be reopened,” he said.