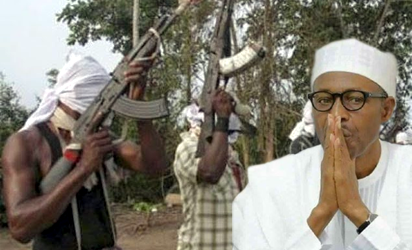 Nnewi—A pressure group, Egbesu Mightier Fraternity, yesterday, gave the Federal Government a two-week ultimatum to release unconditionally, the leader of Indigenous People of Biafra, IPOB, and Director of Radio Biafra, Mr. Nnamdi Kanu and former National Security adviser, Colonel Sambo Dasuki. In a statement by its spokesman Captain Agbaka Doctor, entitled, ‘Release Nnamdi Kanu and Colonel Sambo Dasuki Now or else…. Operation Shut Down Oil and Gas in Niger Delta Region Will Start, and made available to Vanguard, the group said that after the expiration of their ultimatum, the Federal Government will regret not heeding their directive. “We, the Egbesu Mightier Fraternity is warning the Federal Government of Nigeria to release the IPOB leader and the former National Security Adviser, Colonel Sambo Dasuki (rtd) in the next two weeks unconditionally or they will regret not listening to us. “The Federal Government is also directed to ask the military to leave Gbaramatu Kingdom within the same period or else we are going to shut down every oil and gas activity in the region. Tompolo is not the problem of Nigeria or behind the problem in Niger Delta but misrule and high handedness of the Federal Government and its officials. “Tompolo is not responsible for the bombing of oil and gas pipelines in the region. Egbesu Mightier Fraternity is part of the bombings. We are responsible. Niger Delta Avengers is a branch of the struggle and nobody should take us for granted or we will do more,” they said. They wondered what Chief Government Ekpomupolo, alias Tompolo did that he is being harassed and intimidated by agents of Federal Government, and warned that the intimidation and harassment should stop immediately.