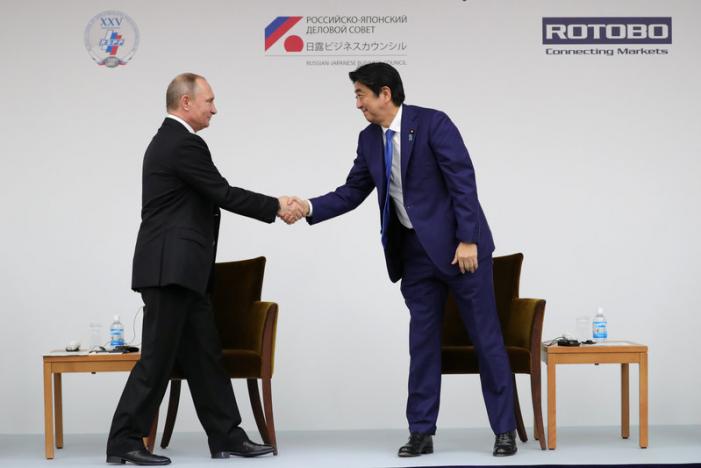 Japanese Prime Minister Shinzo Abe and Russian President Vladimir Putin wrapped up two days of talks on Thursday, with numerous economic deals but no big breakthrough on a territorial row that has over-shadowed ties since World War Two.

Putin was heading home with promises of economic cooperation after appearing to achieve what experts said was a key objective – easing international isolation when Russia faces Western condemnation over the destruction of eastern Aleppo in Syria, where it is backing President Bashar al-Assad’s forces.

Abe and Putin agreed to launch talks on joint economic activities on disputed islands at the center of the territorial row as a step toward concluding a peace treaty formally ending World War Two, the two sides said in a joint statement.

The islands in the Western Pacific, called the Northern Territories in Japan and the Southern Kuriles in Russia, were seized by Soviet forces at the end of World War Two and 17,000 Japanese residents were forced to flee.

The dispute over their sovereignty has prevented the two countries signing a peace treaty.

Abe said he and Putin had taken “an important step” toward a peace treaty but concluding one would not be easy.

“The issue won’t be solved if each of us just make their own case,” Abe said at a news conference with Putin.

“We need to make efforts toward a breakthrough so that we don’t disappoint the next generation. We need to set aside the past and create a win-win solution for both of us.”

Putin dismissed the notion that he was only interested in getting economic benefits from Japan.

“If anyone thinks we’re interested only in developing economic links and a peace deal is of secondary importance, that’s not the case,” he told the same news conference.

“For me, the most important thing is to sign a peace agreement because that would create the conditions for long-term co-operation.”

As the two leaders held their second round of talks on Friday, right-wing activists in trucks mounted with loudspeakers circled the streets not far from the prime ministers’ office, blaring “Return the islands” and “Putin Go Home”.

Abe has pledged to resolve the territorial dispute in the hope of leaving a significant diplomatic legacy and building better ties with Russia to counter a rising China.

He had hoped the lure of economic cooperation for Russia’s economy, hit by low oil prices and Western sanctions, would pave the path for significant progress on the dispute.

Putin, however, would risk tarnishing his domestic image as a staunch defender of Russian sovereignty by compromising.

Russian officials said the two sides had signed a total of 80 documents, including 68 on commercial matters, during Putin’s visit, including private-sector deals.

The Japan Bank for International Cooperation and the Russian Direct Investment Fund signed an agreement to set up a $1 billion investment fund to promote economic cooperation between the two countries.

But there was less than met the eye in some of the deals.

Despite strong pressure from the Abe administration, companies remain wary of the risk of doing business in Russia, said a Japanese official involved in summit preparations.

“Hence many of the agreements being announced are vague memorandums of understanding,” he said.

The two leaders agreed on Thursday, in talks at a hot spring resort in southwest Japan, on the importance of resuming security dialogue, a Japanese official said.

Japan has long insisted its sovereignty over all four islands be confirmed before a peace treaty is signed.

But there have been signs it has been rethinking its stance, perhaps by reviving a formula called “two-plus-alpha”, based partly on a 1956 joint declaration in which the Soviet Union agreed it would hand over the two smaller islands after a peace treaty.

Over the decades, the two sides have floated the idea of joint economic activity on the islands, but how to do that without undercutting either side’s claim to sovereignty has never been resolved.

Putin, a judo expert, wrapped up his visit with a stop at the Kodokan Institute, the global judo headquarters, where he and Abe watched a judo performance by two men dressed in what looked like samurai armor.