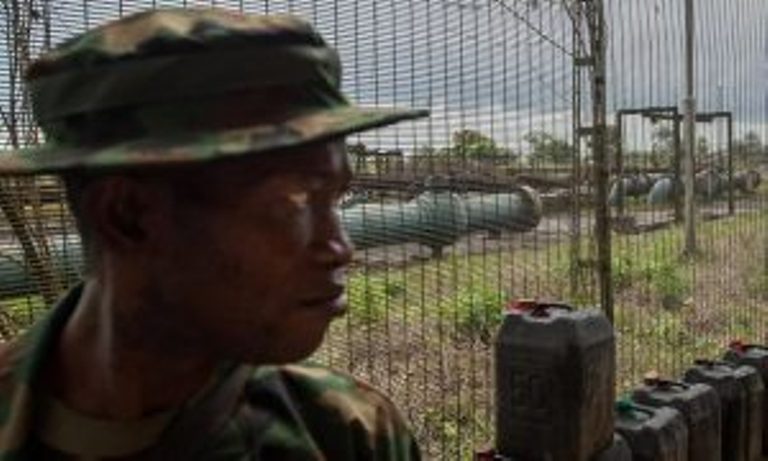 To check incessant attacks on the country’s oil pipeline, the Joint Military Force (JMF) in the Niger Delta said it had arrested 16 suspects who allegedly vandalised pipelines and engaged in illegal bunkering in Delta.

Col. Isa Ado, spokesman of Operation Pulo Shield, the task force, made this knownat a news conference at the 222 Battalion Headquarters in Ughelli in Delta on Friday.

Ado said that the suspects were nabbed in two separate operations.

According to him, in one of the operations led by Lt-Col. Mathew Oyekola, Commanding Officer, 222 Battalion, the force recovered 124 pieces of oil pipes valued at over N18 million at Otokutu village in Ughelli.

He said that the pipes, meant for a project at Aburah, were stolen from the oil fields operated by Nigerian Petroleum Development Company (NPDC), adding that four suspects, including an NPDC staff member, were arrested.

Other items recovered included a Toyota Sports Utility Van (SUV) kept at the 222 battalion headquarters.
Ado said that in the second operation “our troops from the Maritime Component, NNS DELTA, found and destroyed many illegal oil bunkering sites between April 22 and 24.

“The sites were located around Tagola community, near Egwa 1 in Warri South-West Local Government Area of Delta.

“The items and suspects are in custody of NNS DELTA for preliminary investigations,” he said.

The spokesman reiterated that the JMF, under the command of Maj.-Gen. Alani Okunlola would continue to carry out its operations professionally as enshrined in its mandate.

He urged community leaders to discourage their youths from vandalism, “which sabotages the economy and assist the force with credible information that will lead to arrest of culprits’’.