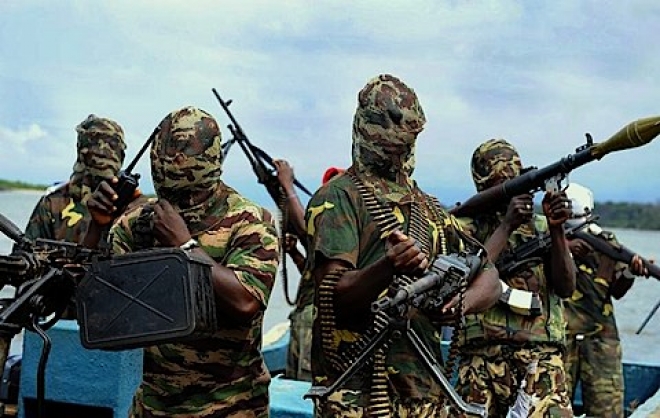 Sources in the community told our correspondent on Wednesday that the incident occurred at around 1:40am on Tuesday around the Batan community in the Warri South West Local Government Area of the state.

It was learnt that one of the affected trunk lines had just been repaired after militants blew it up earlier in the year.

The sources added that the delivery lines commenced operation four days ago, adding that the Nigerian Petroleum Development Company had earlier shut them down following incessant attacks from suspected militants in the region.

A military source, who confirmed the incident, told our correspondent that the attack happened about 13 kilometres from the Batan Flow Station operated by the NPDC and the Pipelines and Product Marketing Company.

At about 2:30pm on Wednesday, technical experts and community youths being assisted by security personnel had not found the exact location were the incident happened.

The Chairman of the community, Mr. Dickson Ogugu, while confirming the incident to our correspondent, said a surveillance team comprising security agencies, engineers and locals had been sent to the creeks where the incident happened.

Ogugu, who condemned the attack, said the surveillance team was tracing the spot through the massive spill emanating from the creeks.

He lamented that the incident had resulted in an upsurge of spills in the creeks surrounding the community.

No militant group has claimed responsibility for the attack.

Two of the prominent militant groups in the region, the Niger Delta Avengers and the Niger Delta Greenland Justice Mandate, last week, asked the NNPC to stop further repairs of attacked facilities or risk an attack on those supplying the Forcados Terminal.

“In another development, troops of the Operation Delta Safe located at Sector 1 in Delta State, while on routine patrol, heard an explosive sound caused by suspected economic saboteurs at the Batan Flow Station around Ekweregbene, Bantan general area. The incidence is, however, being investigated and details will be made available as events unfold.”